The atmosphere is preparing to send part of the polar vortex southward toward the United States next week with an outbreak of arctic air and lake-effect snow.

The main blast of cold air associated with the plunging polar vortex will swing southeastward into the Central and Eastern states spanning Sunday, Nov. 9, to Friday, Nov. 14, 2014.

According to AccuWeather Long Range Expert Paul Pastelok, "Areas from the northern and central Plains to the Great Lakes, the upper Gulf Coast and the Appalachians will feel significant impact from the arctic outbreak."

The worst of the cold will be felt from Fargo, North Dakota, and Minneapolis to Chicago and St. Louis beginning on Tuesday and continuing through the middle and latter part of the week. Heating demands will jump and people will be reaching for winter coats before venturing outdoors.

Chilly days and cold nights will be felt farther along in the South and along the Atlantic Seaboard late in the week and into next weekend.

The cold air will be accompanied by gusty winds, which will send AccuWeather RealFeel® temperatures plunging into the single digits and teens in the north and into the 20s and 30s in part of the Deep South. Such cold will raise the risk of hypothermia and frostbite in the North and will make it uncomfortable for some outdoor activities in the South. 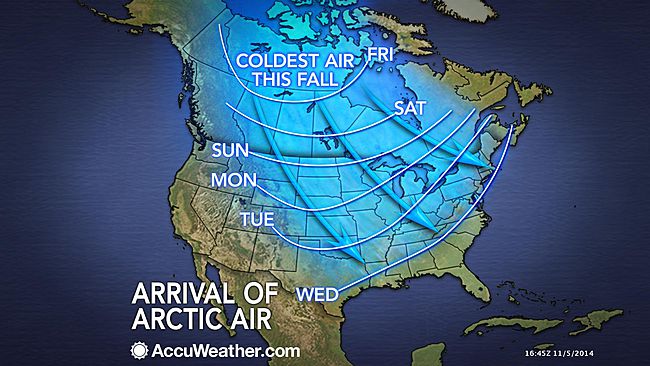 While the brunt of the cold air is not likely to be directed toward the I-95 corridor of the East, a breeze accompanying the cold air will make if feel more like December for at least a few days.

The action of cold air passing over the relatively warm waters of the Great Lakes will unleash bands of lake-effect flurries, snow and squalls from the Upper Midwest to the interior Northeast.

While snowfall can be heavy in a pattern such as this, it tends to be highly localized.

"A broad area of snow on the ground would result in significantly lower temperatures," Pastelok said.

The bare ground and warm Great Lakes waters will take away some of the severity of this early season arctic outbreak.

"Despite the moderation, freezing temperatures are possible along the upper Gulf Coast from northeast of Houston to northern Florida late next week," Pastelok said.

For folks not ready for winter, there is some indication that the cold weather will ease prior to Thanksgiving.

The weather pattern forecast to send the polar vortex on a southward plunge can be traced back to the western Pacific Ocean, where Typhoon Nuri curved east of Asia earlier this week.

According to Senior Meteorologist Brett Anderson, "In brief, when a typhoon curves away from Asia it causes the jet stream [steering winds] farther to the east across the Pacific and into North America to buckle and amplify days later."

The contorted jet stream can lead to major storms and big surges of warmth and outbreaks of cold air.

Prior to the plunge of the polar vortex, the pattern will give birth to a powerful storm over the northern Pacific Ocean. This storm, partly associated with the former typhoon is likely to slam the Aleutians and west coast of Alaska with high winds, huge waves and heavy precipitation spanning Friday into this weekend.