We have been saying for the last four years that as Europe, the US and other Western and global nation-states continue their debt-fueled collapse the governments of these countries will continue to consider their citizens' wealth to be their own and seize more of their assets.

We have, unfortunately, been vindicated already numerous times.

And, of course, this spring, Cyprus took it a step further and outright confiscated up to 50% of the funds from bank account holders in that country.

Last week the Polish government announced it would transfer to the state (aka. confiscate) the bulk of assets owned by the country's private pension funds (many of them owned by such foreign firms as PIMCO parent Allianz, AXA, Generali, ING and Aviva), without offering any compensation.

BUT IT CAN'T HAPPEN HERE

Think again if you don't think this will occur all across the Western world until The End Of The Monetary System As We Know It (TEOTMSAWKI).

To begin, the Social Security (or as I call it, the Socialist Insecurity) program in the US is, by dictionary definition, a ponzi scheme.

According to Investopedia: "The Ponzi scheme generates returns for older investors by acquiring new investors. This scam actually yields the promised returns to earlier investors, as long as there are more new investors. These schemes usually collapse on themselves when the new investments stop."

In fact, Social Security is even worse than a ponzi scheme.  At least with a ponzi scheme you have the choice whether or not to "invest" with someone like Robert Madoff.  You aren't forced into it.

Plus, completely fraudulently, the US government shows all Social Security (SS) incoming funds as actual revenue and then immediately spends the money and gives an IOU (unpayable, bankrupt US Treasuries) in return to the SS system.  Let me repeat that: they immediately spend the money and deposit an IOU into what is already a Ponzi scheme. And in past years Congress has held committees to consider nationalizing private pension funds, just as Poland did last week (and held committees on doing it in 2010).

What was the main reason that all these governments such as Ireland, Hungary, France, Bulgaria and Poland began stealing with their citizen's private wealth?  It was because their governments were too indebted vis-a-vis their economy and in order to continue operating (and borrowing) they reached out and just took their own citizens' retirement savings and, in almost every case, mandated that the only assets they can hold is government debt (which will collapse or pay 0-3% at a time when inflation often is running over 10%, meaning a net loss of 4-6%+ per year).

So, let's take a look at the debt-to-GDP of all these countries and a few other Western countries. 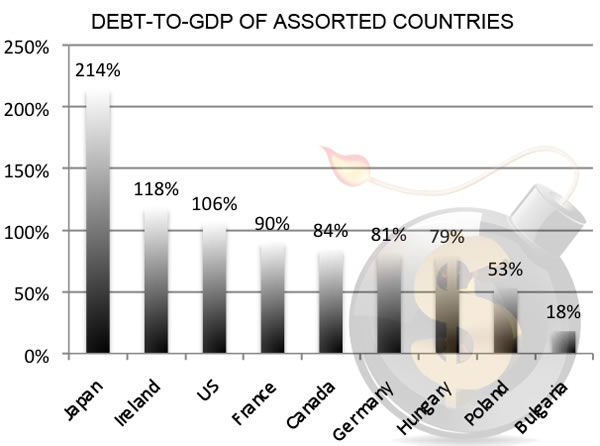 As you can see, with the exclusion of France, all the other countries who have outright stolen private pension funds are all in less debt than the Western countries (or those who have bought into Western-style Keynesian central banking democracies like Japan) who have yet to do so.

Why?  It's mostly because the larger Western countries have yet to lose the confidence of the market.  While the smaller countries with tinier economies and less ability to float their currencies as reserve currencies get the attention of the market first.

But, this is very rapidly changing.  Here is the interest rate change of US government debt in the last few months (yearly chart).

But, remember, $841 billion of that "revenue" was payments into the Social Security scheme.  No company on Earth would include payments into an employee pension plan as income.  So, the more realistic revenue of the US government was $2.4 trillion minus $841 billion in 2012... or approximately $1.55 billion.  In other words, an interest rate nearing 10% would mean that every semi-legitimate cent of tax revenue for the US government, and more, would go to interest payments on the debt alone.

And so expect the US government and most if not all Western governments to do what has happened in places like Hungary, France, Cyprus, Poland and more... attempt to stay alive a little while longer by taking the assets of their citizens.  And tax-sheltered retirements will be the easiest pickings.

HOW TO PROTECT YOURSELF

Since retirement/pension savings will be the easiest target, immediately divest yourself of as much of those assets as possible -- while they are still assets -- and internationalize them.  Get as much outside of the country with the government that purports to own you and your assets as possible.  I did that in 2008 in Canada and have never regretted it.

If you are not willing or able to cash in retirement/pension savings, look to alternative options.  In the US, for example, you can easily convert your IRA into a self-directed IRA for a few thousand dollars and then you are able to invest in almost any asset worldwide.  You can buy racehorses in Dubai, gold in Switzerland or real estate in Galt's Gulch Chile, just as example.  For advice/info or to turn your current IRA into a self-directed IRA, contactTDVSelfDirectedIRA.com.

A self-directed IRA makes sense for anyone with IRA assets over $20,000.  Below that level it becomes debatable in terms of the cost/benefit ratio.

For those with assets inside or outside (total assets) of an IRA of more than $1 million you should contact TDV Wealth Management for an initial consultation about your options.

And, of course, you can always subscribe to The Dollar Vigilante for the latest news, information and actionable intelligence on surviving the coming dollar (and all other fiat currency) collapse.

Because this collapse is going to be messy.