There is an expression on Wall St. that sheep get slaughtered.  But in the past 10 years since the credit crisis, sheep have done pretty well as Quantitative Easing has pushed most markets through the roof.  But let’s be clear about one thing, our underlying hypothesis which I’m sure most here will agree with: Inflation is not what the Fed is saying.  We can debate about what real inflation is, however we can first agree that the stated CPI and other economic numbers that are tied to the official inflation figures are highly manipulated.  As we explain in Splitting Pennies – the world is not as it seems.

So what’s the real inflation figure?  There’s a lot of misinformation and bad data here so we can only look at micro economics for some answers.  Take a look at Ohio and Tennessee, where the difference between official CPI and real food inflation is 39%:

Overall, in the specific case of cereals and bakery goods, the difference between the CPI price for the basket of six core food products, and the average price of the same products in Ohio and Tennessee, is a whopping 39%. This same execrise extended to all other goods and services in the basket would reveal a similar bias to misrepresenting prices to the downside relative to reality. 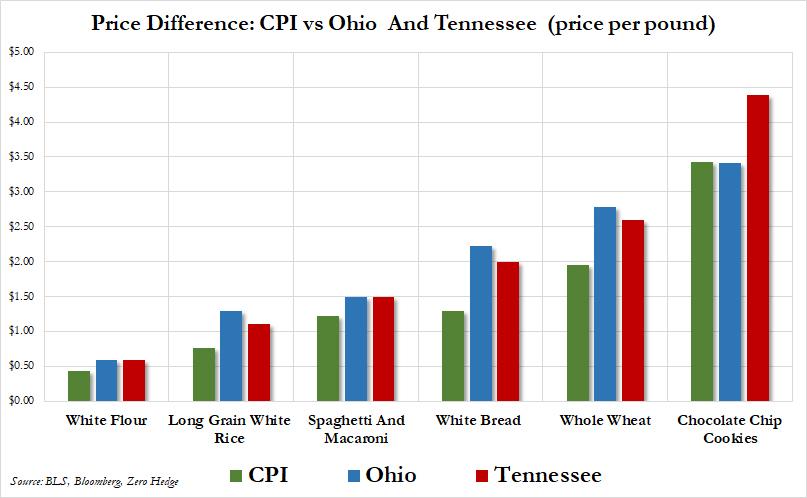 The critical problem represented above is that while the Fed believes that the CPI calculation is accurate, and thus Americans can be subject to far looser monetary policy as the FOMC believes they are paying far less, the reality is that monetary conditions have to be far tighter for reality to catch down with the BLS's woefully incorrect price assumptions.

This is just one way numbers are manipulated.  Whether this is intentional or not (we know it is, we just will never be able to prove it) is not the point.  Not at all.  The real point is that CPI is not real inflation, real inflation includes food, energy, health insurance, clothing, electricity, phone bills that are skyrocketing for no reason other than greedy telecoms taxing their monopoly subjects, and other necessities.  Let’s face it, you can live without your iPhone you can’t live without food.

So what’s the alternative, how to beat CPI

The issue is that there are few investment alternatives that provide greater than 10% returns.  There are so called alternative investments, where managers execute a strategy in markets such as futures, options, or stocks.  But the problem here lies in choosing a manager.  Plus, managers don’t necessarily perform consistently.  It’s an alternative, but it’s not a fool proof solution.  The fact is there is no fool proof alternative.

Another solution for investors they may want to delve into Pre IPO, whereby you can buy shares in Unicorn companies like Airbnb before the IPO.  But this is a long term strategy and it relies on the individuals ability to choose which company will be the next Amazon, so we’re back to stock picking which we know doesn’t work.

Just like with mainstream investing, a balanced portfolio approach is suitable.  But if you’re not a professional manager, it leaves you doing your own work for yourself.  If you have the time, patience, and education to do it, as they say in New Zealand, Good on ya mate.  Let’s call it DIY (Do It Yourself) investing.

The good news about this, you won’t pay a portfolio manager fees, to do this for you.  We will let you in on a little secret, what’s the secret of building a strong portfolio with DIY investing, it’s all about the DD (Due Diligence).  When evaluating an alternative investment manager, here are a list of questions you should ask them:

You can see where this is leading.  You want to get to know everything about your manager.  If the manager isn’t willing to give his location, that’s a huge red flag.  But it all needs to be evaluated in a greater context.  For example, if a manager isn’t regulated but has $200 Million or more in Assets Under Management (AUM) that’s not necessarily a negative.  Many managers will deal with Eligible Contract Participants (ECP) only, and thus registration is not required.  But at the same time, this is the same story that fraudsters will use in order to justify why they aren’t registered.  A single data point shouldn’t make your break your decision, it should be an overall story.

Managers with kids are likely older and have something to lose.  Parenting is one of many harsh life lessons that keeps your ego in check and your ambitions realistic.  That’s not to say that it should be a requirement, however, most of the frauds and situations where traders blew up the accounts were typically managed by younger Cowboys swinging for the fences or supporting a bad habit such as gambling or drugs, which is why the question about hobbies.

If you’re wondering if there are any benchmarks on alternatives, there are a few but they can be misleading.  Let’s take a look at Barclay Hedge CTA Index:

The issue here is that these are self-reporting CTAs.  Barclay Hedge offers a service whereby managers can report performance but it’s unverified.  Most of them are honest, but as they are self-certified, Barclay Hedge tends to collect positive performance (if your strategy blew up why you would report it).

Just like the rest of capitalism, an entire industry has formed around advertising investments.  It’s regulated but like most industry it’s a racket.  Those with the money have the power to spend lobbying Congress for laws favorable to them, and as they control the media it’s a system similar to Oligopoly.  The reason we tell this to a DIY investor is because you have to be able to distinguish paid advertising from solid research.  A great site to start is www.zerohedge.com for the sole reason that it’s not controlled by a certain entity.  Much of the topics are political, but usually have a twist on the markets.  However, the site posts economic analysis which is mostly unbiased (authors may over promote their own methods) but it’s definitely not paid for!

Another site with high quality market analysis is www.seekingalpha.com – an example is a partner of ours authored a groundbreaking story how a publicly traded stock, Revlon (REV) is manipulated.  You can read the article here.  A basic summary of the situation:

You just wouldn’t find this on traditional media, because it’s controlled by the same cabal.

So the point is that if you’re going to invest in the mainstream you might as well buy indexes because hedge funds, mutual funds, and other market tied investments generally underperform the index.  Plus they have added fees.

But if you are going to try to do your own DIY investment portfolio, you’re going to need to get educated.  The wealthy enjoy 30%+ returns on their investments because of access.  They know before the event.  What’s interesting though, this is no longer private info.  For example one can follow In-Q-Tel the CIA’s venture fund, to peer into the future:

Why you should care: IQT knows how to pick winners and isn’t afraid to go it alone.

So there’s one way to co-invest, just mirror trade In-Q-Tel.  Of course it’s not so easy, as they mostly do very early seed/startup investing.  But it’s a great data point.  They secretly were early investors in Google and Facebook, both explosive growth stories with absolutely no business plan (Google and Facebook are both ‘wants’ not ‘needs’).

So there really is something like ‘open secrets’ where one can read and see what intelligence agencies are doing.  Silicon Valley is listening, are you?

If you are considering alternative investing, we are just suggesting to change your thinking.  Evaluating TV advertisements is not part of the DIY ecosystem.  You’ve got to tune out of TV and tune in to the internet.  Reading required.  Otherwise, you’ll just be throwing crap on a wall and seeing what sticks.  Wall St. uses this method but they have the billions to risk it.  Do you?

What we are saying is that choosing an alternative investment is an educational experience and should not be taken lightly.  The world is a big place and there are very clever sharks posing as investment advisors that only want to rob you of your hard earned cash.  In the most extreme cases, it would be a Madoff type situation.  In the middle ground, managers want to ‘churn’ your account for commissions – basically siphoning your equity from their brokerage account into their pocket.  Such managers may be regulated and may know all the right things to say to you.  So how to avoid fraud completely?  The only way is learning.  Unfortunately there is no ‘quick fix’ and anyone offering a ‘click here now’ to solve all your problems or completely delete risk is lying.

What we are saying is that the smartest path towards investment success is knowledge, as they say information is power.  And that can only come from reading.  We’re going to show you a few books to get started, but there are many well written highly acclaimed business and investing books you can find in your local bookstore.

Incerto: Fooled by Randomness, The Black Swan, The Bed of Procrustes, Antifragile

Taleb is perhaps the most intelligent and informed mathematical author on investing, who poses interesting questions such as where NOT to invest, which may be more valuable than where TO invest.

The Essays of Warren Buffett: Lessons for Corporate America – This book provides thinking into who is the greatest investor ever.  Warren Buffett had tons of losses but overall he started from nothing and his wins greatly outperformed his losses.