During the beginning years of the Forex market, trends developed that lasted months and years. Even recently, trends have developed even though they may have reversed.

But when the Forex markets are subject to one speech by Ben Bernanke, or another Fed chairman, how is a trader to know when that will happen and how the market will react?

We've seen evidence of market manipulation in other markets, most recently Friday's bond market frontrunning. The problem with finding data of such frontrunning in Forex is that since Forex does not trade on a centralized exchange, and the market is so liquid, data about trading activity such as referenced above is not available.

But traders will attest to price moves before data releases, and large Forex traders tipping each other off (currently not illegal). Also there is a growing WM/Reuters scandal showing how Forex traders manipulated the fix rates.

Some believe the Euro highly overvalued. Europe has a banking crisis, horrible economic data, and a deteriorating political situation. Yet the Euro continues to maintain levels near 1.32, baffling many traders. Some days, the Euro is even correlated with the S&P 500. But if you look at the daily chart of the EUR/USD it's basically hovering up and down around 1.30:

Quality data that proves how difficult it's becoming to make decent returns by trading Forex are provided by Barclay Hedge Currency CTA index: 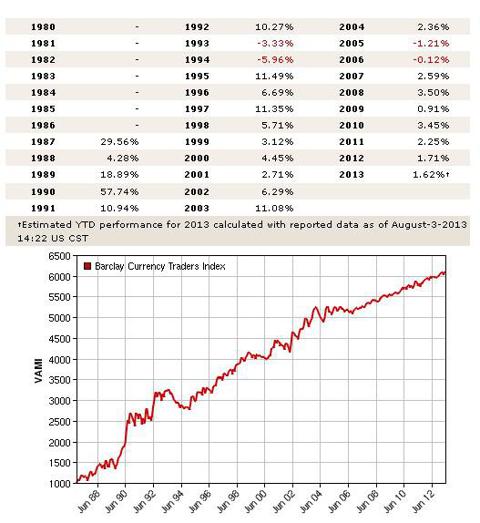 In 2013 currency traders returned 1.62% so far for the year. In 2012 they returned 1.71%, not beating inflation. But look back in 1990 they returned 57.74%. Of course the Forex market is a different market today, but that's exactly the point. Every month Forex becomes more erratic, more random (not to be confused with volatility).

Some automated algorithmic systems, may not have such problems trading, especially high frequency systems that thrive on volume and price movement rather than trends or technical analysis. These systems are now offered to investors via CTA programs, signal services, and other means (they are not only for well funded high profile traders). Automated systems will thrive in the future Forex market, especially those with some intelligence, while traders will be faced with increasing black swan events, such as Fed announcements, political crisis (such as currently in Europe) and others.

While not explicitly a market event, the revelations of Edward Snowden have the potential to significantly impact global markets, including Forex.

In the short term, the London summit mitigated financial contagion emanating from southern Europe; gave the World Bank additional resources to deal with the problem of trade finance for emerging-market exports; appeared to give the IMF more firepower and legitimacy; and seemed to catalyze coordinated fiscal stimulus to restore confidence.But only the more technical of these four achievements - the first two - stood the test of time. Everything else that was agreed at the London summit turned sour. The follow-up summits were lame. The idea of coordinated fiscal stimulus became problematic when it became obvious that many European governments could not take on more debt without unsettling markets and pushing themselves into an unsustainable cycle of increasingly expensive borrowing.

And yet, however limited the London summit's achievements proved to be, the summit process itself was not fully discredited until Snowden's intelligence revelations.

The possible outcome is so uncertain, because there is no telling how leaders will react, but it's certain that the revelations will impact negotiations. In the current environment markets are subject to heavy influence of agreements made by politicians, especially in the EU which is undergoing rapid financial reforms due to the banking crisis. In the most significant recent example, the Troika implemented a bail-in policy in Cyprus which is now being used as a template around the world, even in New Zealand.

How would a Forex trader include the potential political outcomes of such events in any strategy? The answer is that it's impossible, because there are too many variables and none of them are discreet.

To put in one sentence, trading Forex via ETFs or invidual currencies in the next few years will be more and more challenging. One exception to prudently invest in Forex ETFs is to hedge currency risk of your portfolio or business.

One alternative would be to find a Forex manager that has a substantial track record, or that uses automated algorithmic trading systems. While algorithmic systems are not risk-free, they will be able to trade the market better than human traders because they usually are analyzing data at a faster rate and look at Forex data simply as numbers, what the market really is. Also they typically trade in smaller time frames and are able to automatically deal with black swan events either by cutting losses or by capturing momentum at any time (whereas a trader may be out of the office or for whatever reason doesn't know how to capture the momentum).

The purpose of this article is to explain the challenges of manually trading individual currencies, not to recommend particular Forex investments. If you are considering investing in currencies, we suggest researching established managers and funds (there are many).