Iran Close to a Nuclear Breakout?

DAHLGREN, Va.—A warning siren bellowed through the concrete bunker of a top-secret Naval facility where U.S. military engineers prepared to demonstrate a weapon for which there is little defense.
Officials huddled at a video screen for a first look at a deadly new supergun that can fire a 25-pound projectile through seven steel plates and leave a 5-inch hole.
The weapon is called a railgun and requires neither gunpowder nor explosive. It is powered by electromagnetic rails that accelerate a hardened projectile to staggering velocity—a battlefield meteorite with the power to one day transform military strategy, say supporters, and keep the U.S. ahead of advancing Russian and Chinese weaponry.
In conventional guns, a bullet loses velocity from the moment the gunpowder ignites and sends it flying. The railgun projectile instead gains speed as it travels the length of a 32-foot barrel, exiting the muzzle at 4,500 miles an hour, or more than a mile a second.
“This is going to change the way we fight,” said U.S. Navy Adm. Mat Winter, the head of the Office of Naval Research.
Watch the Video: Pentagon officials believe the high-tech railgun could pave the way for a military advantage defending assets on sea and on land. Photo: U.S. Department of Defense
The Navy developed the railgun as a potent offensive weapon to blow holes in enemy ships, destroy tanks and level terrorist camps. The weapon system has the attention of top Pentagon officials also interested in its potential to knock enemy missiles out of the sky more inexpensively and in greater numbers than current missile-defense systems—perhaps within a decade.
The future challenge for the U.S. military, in broad terms, is maintaining a global reach with declining numbers of Navy ships and land forces. Growing expenses and fixed budgets make it more difficult to maintain large forces in the right places to deter aggression.
“I can’t conceive of a future where we would replicate Cold War forces in Europe,” said Deputy Secretary of Defense Robert Work, one of the weapon’s chief boosters. “But I could conceive of a set of railguns that would be inexpensive but would have enormous deterrent value. They would have value against airplanes, missiles, tanks, almost anything.”
Inside the test bunker at Dahlgren, military officials turned to the video monitor showing the rectangular railgun barrel. Engineer Tom Boucher, program manager for the railgun in the Office of Naval Research, explained: “We are watching the system charge. We are taking power from the grid.”
Wires splay out the back of the railgun, which requires a power plant that generates 25 megawatts—enough electricity to power 18,750 homes.
The siren blared again, and the weapon fired. The video replay was slowed so officials could see aluminum shavings ignite in a fireball and the projectile emerge from its protective shell.
“This,” Mr. Boucher said, “is a thing of beauty going off.”
The railgun faces many technical barriers before it is battle ready. Policy makers also must weigh geopolitical questions. China and Russia see the railgun and other advances in U.S. missile defense as upending the world’s balance of power because it negates their own missile arsenals.
The railgun’s prospective military advantage has made the developing technology a priority of hackers in China and Russia, officials said.
Chinese hackers in particular have tried to penetrate the computer systems of the Pentagon and its defense contractors to probe railgun secrets, U.S. defense officials said. Pentagon officials declined to discuss the matter further.
The Navy began working on the railgun a decade ago and has spent more than half a billion dollars. The Pentagon’s Strategic Capabilities office is investing another $800 million—the largest share for any project—to develop the weapon’s defensive ability, as well as to adapt existing guns to fire the railgun’s high-tech projectiles. 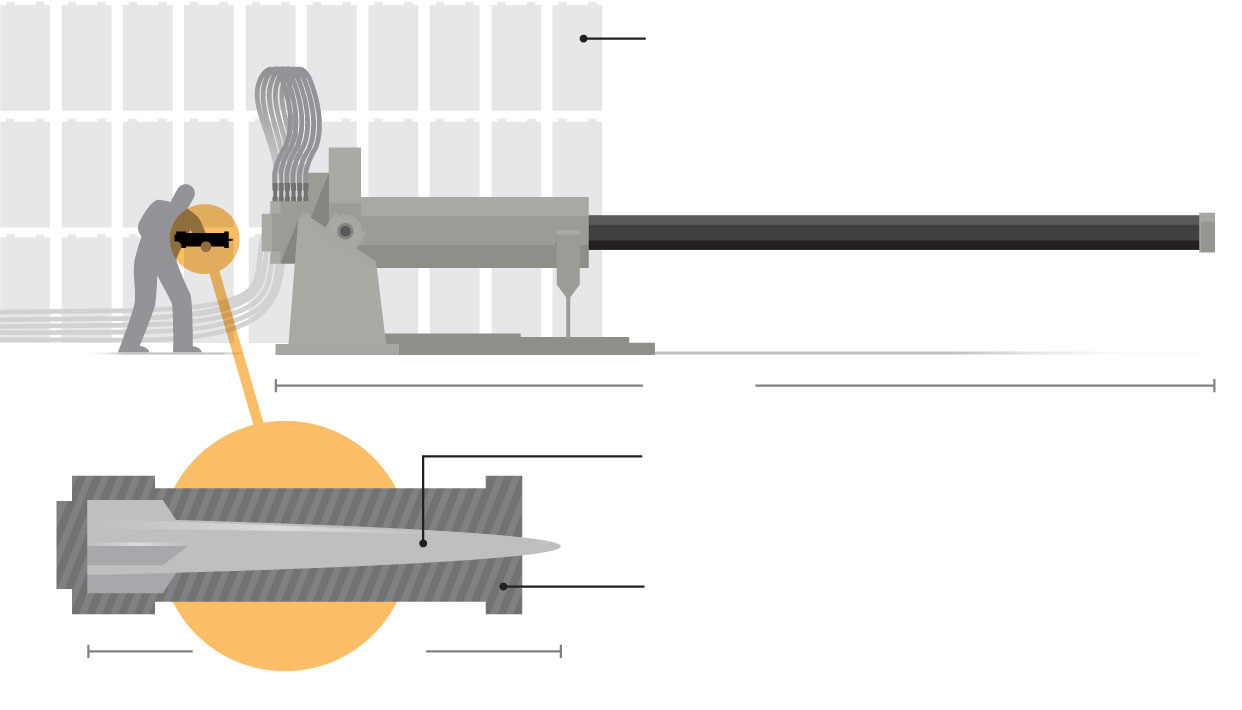 Power
A 25 megawatt power plant and large capacitor bank are required to provide enough pulse power to fire the weapon 10 times a minute.
Electromagnetic railgun
32 feet
Projectile
A non-explosive bullet filled with tungsten pellets; weight: approx. 25 pounds.
Shoe
An aluminum jacket that supports the bullet in the gun barrel; also provides a bridge for the current between the rails.
Approx. 24 inches
Source: Office of Naval Research
Some officials expressed concern the technology has commanded too large a portion of resources and focus. “This better work,” one defense official said.
The age of the gun faded after World War II, hampered by the limited range and accuracy of gunpowder weapons. Missiles and jet fighters dominated the Cold War years, prompting the Navy to retire its big-gun battleships. The railgun—and its newly developed projectiles—could launch a new generation of the vessels.
“Part of the reason we moved away from big guns is the chemistry and the physics of getting the range,” said Jerry DeMuro, the chief executive of BAE Systems, a railgun developer. “The railgun can create the kind of massive effect you want without chemistry.”
The Navy’s current 6-inch guns have a range of 15 miles. The 16-inch guns of mothballed World War II-era battleships could fire a distance of 24 miles and penetrate 30 feet of concrete. In contrast, the railgun has a range of 125 miles, officials said, and five times the impact.
“Anytime you have a projectile screaming in at extremely high speeds—kilometers per second—the sheer kinetic energy of that projectile is awesome,” Mr. Work said. “There are not a lot of things that can stop it.”

Railguns have for years been limited to laboratories and videogames.
Former President Ronald Reagan ’s Strategic Defense Initiative—the so-called Star Wars missile defense—at one time envisioned using the railgun to shoot down nuclear missiles. Those plans were stalled by 1980s technology. One problem was that the gun barrel and electromagnetic rails had to be replaced after a single shot.
The Navy now believes it has a design that soon will be able to fire 10 times a minute through a barrel capable of lasting 1,000 rounds.
Besides speed, the railgun also has a capacity advantage. A typical U.S. Navy destroyer can carry as many as 96 missiles—either offensive cruise missiles or defensive interceptors. A ship armed with a railgun could potentially carry a thousand rounds, allowing the vessel to shoot incoming missiles or attack enemy forces for longer periods and at a faster rate of fire.
Unlike the Reagan-era initiative, the Pentagon doesn’t see the railgun as a shield against intercontinental ballistic missiles but defense against shorter-range conventional missiles.
The U.S. has kept its military dominance over the past quarter-century largely through such precision weaponry as guided missiles and munitions. It also has spent billions of dollars on interceptor-missile based defense systems to shoot down ballistic missiles fired at the U.S. or its allies.
That monopoly is about over. China is perfecting a ship-killing ballistic missile. Russia mostly impressed U.S. military planners with the power and precision of its cruise missiles deployed in Syria, and its improved artillery precision revealed in Ukraine.
“I am very worried about the U.S. conventional advantage. The loss of that advantage is terribly destabilizing,” said Elbridge Colby, a military analyst with the Center of a New American Security.
Defense planners believe the U.S. needs new military advances. Russia, for example, is believed to be developing longer-range surface-to-air missiles and new electronic warfare technology to blunt any forces near its borders.
Prospects for an armed conflict among the great powers still seem remote. But for the first time since the end of the Cold War, the Pentagon is again looking closely at responses to rising tensions with China and Russia.
Military planners say the railgun would be useful if the U.S. had to defend the Baltic states against Russia, or support an ally against China in the South China Sea.
Moscow and Beijing are investing in missile systems aimed at keeping the U.S. out of those respective regions. A railgun-based missile defense could defend naval forces or ground troops, making it easier to move U.S. reinforcements closer to the borders of Russia or China, officials said. 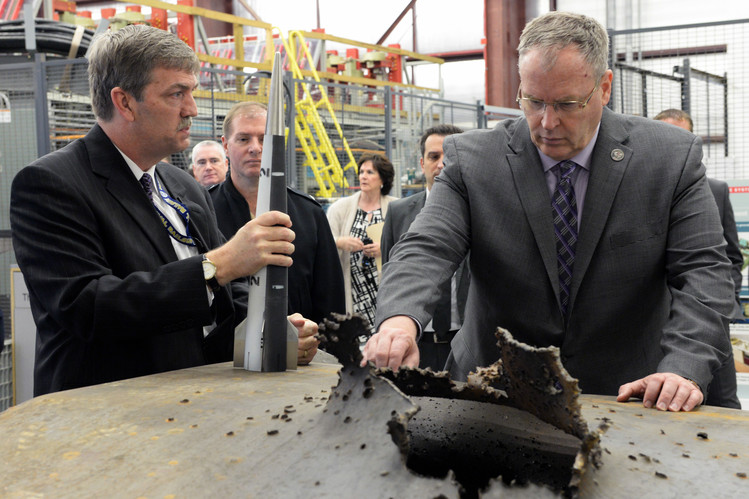 Deputy Secretary of Defense Robert Work, right, views the hole made in a steel plate by a railgun projectile during testing last year at a top-secret Naval facility in Dahlgren, Va. PHOTO: U.S. DEPARTMENT OF DEFENSE
“You can’t ignore the fact that Russia has great ability to mass conventional munitions and fire them over great range. We have to be able to fight through those salvos,” said Mr. Work, of the Pentagon. “And the railgun potentially will give us the means to do that.”
Russian officials, meanwhile, including Alexander Grushko, Moscow’s envoy to the North Atlantic Treaty Organization, have said technological advances by the U.S., including missile defense, could undermine the strategic stability currently guaranteed by the relative balance between the Russian and U.S. nuclear arsenal.

Hitting a missile with a bullet—a technical obstacle that hampered Mr. Reagan’s initiative—remains a challenge. Railgun research leans heavily on commercial advances in supercomputing to aim and on smartphone technology to steer the railgun’s projectile using the Global Positioning System.
“Ten years ago, we wouldn’t have been able to build a projectile like this because the cellphone industry, the smartphone industry, hadn’t perfected the components,” said William Roper, the director of the Pentagon’s Strategic Capabilities Office. “It is a really smart bullet.”
Development of the railgun guidance system is about done, officials said, but circuits in the projectile must be hardened to withstand gravitational forces strong enough to turn most miniaturized electronics to scrap.
Missile defense by the railgun is at least a decade away, but Pentagon officials believe the weapon’s projectiles can be used much sooner. They are filled with tungsten pellets harder than many kinds of steel, officials said, and will likely cost between $25,000 and $50,000, a bargain compared with a $10-million interceptor missile.
The electrical energy required to fire a railgun means it is likely to be used first as a ship-mounted weapon. Only one class of Navy ship, the Zumwalt-class destroyer, has such a power plant, officials said. The Navy is building just three of those destroyers, so the Pentagon is working to adapt the projectile to use in existing Naval guns on other vessels, as well as for Army artillery.
While slower than a railgun, a powder-fired railgun projectile still flies at 2,800 miles an hour, which extends the range and power of existing weapons.
At Dalhgren last year, military engineers test-fired 5- and 6-inch Navy guns loaded with a version of the railgun projectile. The range of the Navy’s 6-inch guns was extended to 38 miles from 15 miles.
The Pentagon also tested the railgun projectile in 155mm Army howitzers, successfully extending its range.
“The Navy is on the cusp of having a tactical system, a next generation offensive weapon,” Mr. Roper said. “It could be a game changer.”