Trump will soon assume his elected office, and potentially change FX markets forever. Well, it's already happened. But what we've seen happen now, has been mostly 'talk' - whereas in 4 days, it will be 'reality.' First let's look at the best example in FX of the Trump Effect, USD/JPY traded as (FXY), Guggenheim CurrencyShares Japanese: 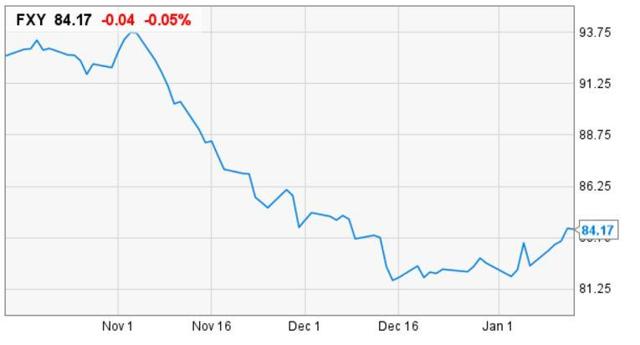 This long slide was a no-brainer trade of a lifetime. A blind bat with no wings could have flown through this tunnel. Once it was clear that Trump was going to implement a pro-USD policy one way or another (after the election) the USD strengthened against all pairs but most notably against the Japanese Yen . Note that, this chart represents the JPY going down, not up, as you would see in a USD/JPY chart which is quoted in the reverse.

Stock traders can trade FX in their stock accounts through ETFs. The downside, is that you don't get leverage. The huge upside though - huge options! There are many deep out of the money options to play such an event. So what will happen to Guggenheim CurrencyShares Japanese now? Probably, a short reversal maybe back to 87 Max, and then a continued slide down to historic levels. That's because FX markets haven't priced in 'The Trump Effect' completely yet.

Take a look at any of Trump's policies which can impact FX, let's look at the potential scenario where Trump labels China a Currency Manipulator - for which they certainly are. But here's the catch - EVERY fiat currency manipulates their currency via central bank policy. Here's where the mainstream media is wrong. Fred Imbert of CNBC claims that Trump is wrong because China has allowed the Yuan to float against major currency pairs. This is true. But China imposes capital controls, which has given rise to a massive black market not only FX but for cash transfers too. The Yuan is highly controlled by the PBOC, even if that means selling Yuan to support FX operations in foreign markets.

It's clear where Fred is getting his misinformation from:

So here we go. The CFR represents the 'globalists' that are behind the push to keep the global status quo, as is. They're in China, and making good profits from the fact that China manipulates their currency. The best example being Wal-Mart Stores, Inc. (WMT) that directly benefits from the Chinese manipulation. Simply put, Wal-Mart Stores, Inc. profits huge because their supply is in China and their customer base is mostly in the United States in US Dollars. Not everything sold at Wal Mart comes from China, but almost nothing sold at Wal Mart is manufactured in the United States, with the huge exception of Wal Mart brand products "Equate" which are manufactured in Bentonville, AR (but, they are really 'assembled there - they take huge advantages of their USD buyer base in foreign countries). Anyway, if the Yuan rapidly appreciated, Wal Mart would have a serious problem on their hands. It's a question of good for consumers, bad for billionaires. Has Wal Mart greatly helped the economy? Many detractors say not, such as Noam Chomsky, who say that in the last 30 years corporate America has relied on financial manipulations, more than producing value. Wal Mart is a perfect example, as well as being a huge benefactor of a cheap Yuan.

Practically, a company as successful as Wal-Mart Stores, Inc. will adapt, it isn't as if this is going to make Wal-Mart Stores, Inc. crumble - far from it. They'll manufacture in Arkansas, there will be millions of illegals desperate for less than minimum wage factory jobs after Trump builds the wall. Let's not forget that foreign companies such as Hyundai, Kia, and many others - manufacture their products in places like Alabama. BMW has a massive plant in South Carolina, in Spartanburg. So this trade situation is not a one way deal, nor is it as simple as fixing the Chinese Currency Manipulation problem. The point is that there are many factors at play here, corporate and political power, central bank policy, and of course real trade as seen in the Baltic dry index. And what Trump has accomplished, for better or worse, he's made all this depend on his latest Tweet.

Tomorrow, Trump can make a Tweet that can cause the CurrencyShares British Pound Sterling ETF (FXB) to crash or skyrocket, based on the markets interpretation of it. That's more powerful than his new job in the Oval Office. Such power maybe never existed before, because it's always been reserved to big billionaire hedge fund traders, and it's always been limited. Just because Kyle Bass makes a statement, it doesn't move markets.

So whether you're knowledgeable about FX or not, you should be, because it can impact the stock market in ways that has never seen before. Previous presidents have been globalists, which tend to want a stable, non-existant FX market - which resembles a one world currency. Trump's policies are the opposite. By imposing sanctions on China, taxing imports from Mexico, and other pro-America policies, Trump is putting a force in the market that never existed before.

Bernanke had his 'Bernanke Put' - Trump has created something that we can only call the "Trump Call" because he's betting long on America- whatever the consequences will be on the markets. What that means? It means that this plan wasn't thought out too well. There can be collateral damage, there can be knee-jerk reactions, portfolio rebalancing, and a number of financial ramifications that can rock FX markets. It can potentially make Brexit look like a walk in the park.

One good thing for stock investors generally, it will make companies more evolved, for example half of listed issues do not hedge FX, but the other half do. Corporations who are at the tail end of the "Trump Call" (in 2016, 2015 it was called "Currency Headwinds") will suffer greatly. Those ahead of the curve, will profit immensely. It can lead to a golden area of finance on Wall St. - but there certainly will be a huge number of firms that won't evolve, won't hedge the FX risk, and ultimately, will be bankrupt or bought out.

The "Trump Call" is not only pro-America it's pro-Wall St. and a great opportunity to make money, but you have to be in it to win it.