This Is Not A Revolution. It’s A Blueprint For Locking Down The Nation

“We Came To Riot”: Illinois Man Arrested With Cache Of Explosives

False flag EXPOSED: Is George Floyd alive? We are all victims of the Cartel’s Brutality

The crumbling of the OLD GUARD

Climate Change is real, but its manufactured. Weather is the new battlefield

(Natural News) The tyranny of Big Tech is now on full display in America as Twitter has unleashed an army of so-called “fact-checkers” (i.e. left-wing propagandists) to place fact-check labels on the tweets of President Trump.“Fact-checking” is just th…

From ZeroHedgeTwo months ago, St Louis Fed president James Bullard triggered a market plunge when he predicted that unemployment may soar to 30% and GDP plunge by an unprecedented 50%, vastly eclipsing the collapse observed during the Great D…

From ZeroHedgeA bizarre twist in the murder of George Floyd was reported on Thursday night, as a former club owner in south Minneapolis revealed that Floyd worked at her club as a security guard, alongside recently fired police officer Derek …

from ZeroHedgeThe economy was booming. The stock market was setting records. Then coronavirus came along and governments shut things down to minimize the pandemic. That led to massive layoffs and a nasty recession. But once states open up, th…

(Natural News) One of the greatest economic booms in our country’s history has been brought to its knees by a virus. Over 80,000 souls have been lost to this pandemic, and our country is slowly collapsing. The number of businesses lost to this virus is…

From Zero Hedge:A study published in the Lancet on Friday which prompted the World Health Organization to halt global trials of hydroxychloroquine to treat COVID-19 has fallen under scrutiny over a data discrepancy, The Guardian rep…

(Natural News) The reason why Microsoft co-founder and billionaire eugenicist Bill Gates is being given so much airtime amid the Wuhan coronavirus (COVID-19) crisis is because Gates is currently the world’s largest manufacturer of vaccines, a…

From Zero Hedge:Wikipedia co-founder Larry Sanger has been sounding the alarm over the website for some time now – previously noting that the site had failed to reign in ‘bad actors’ and was ‘broken as a result.’Now, Sanger opines on the webs…

Authored by James Rickards via The Daily Reckoning,Remember the pro-democracy protests in Hong Kong against Chinese authoritarianism?Well, guess what? They’re about to start again.And U.S.-Chinese relations could get even worse than they are right now….

By Keoni Everington, of the Taiwan News
A White House petition was created last week after news broke that the Twitter accounts of Chinese dissidents started to disappear after a controversial Chinese-American artificial intelligence (AI) expert was hired to serve on the company’s board.
On May 11, Twitter announced in a press release that it was hiring Li Fei-Fei (李飛飛), an AI expert and former vice president of Google, to its board of directors as a “new independent director” with immediate effect. Li quit Google in 2018 after a trail of leaked internal emails revealed that she appeared to be more concerned about the public relations damage to Google’s image if news broke about the company’s work on Project Maven than the ethical issues raised by over 3,000 Google employees.
Project Maven is a U.S. Department of Defense AI project that seeks to use the technology to help military drones select targets from video footage.
During her tenure at Google, there is no public record of Li objecting to the controversial Project Dragonfly, which was meant to be a search engine that would suit China’s censorship rules, as she opened an AI research facility in Beijing.
When she took the helm of Google’s new AI center in Beijing, Li was quoted in Chinese media as using the CCP slogan “stay true to our founding mission” and said that “China has awakened.” In addition, Li allegedly has ties to a student association that is affiliated with the Chinese Communist Party’s (CCP’s) United Front, according to Radio Free Asia.
A week after Li joined Twitter, a Chinese writer who goes by the handle Caijinglengyan (財經冷眼), discovered that four of his accounts were simultaneously deleted on May 18. He did not receive an explanation until May 23, when he was told his accounts had been taken down for violating Twitter’s rules against posting identical content on duplicate accounts. 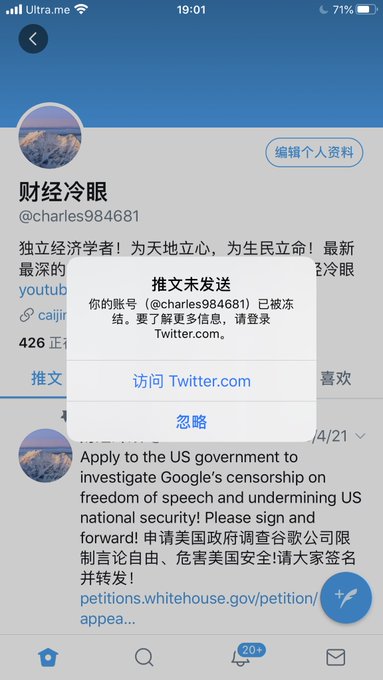 1,967 people are talking about this
He countered that he had only posted content on one of the accounts and used the other to retweet the original post. He pointed out that Twitter does not have a policy precluding a person from having more than one account.
The writer stated that he believes the real reason for his account cancellations was that, on May 17, he tweeted that Twitter’s new board member has a “red background.” In the post, he alleged that she is a member of a student association affiliated with the CCP’s United Front and has close ties with “Second Generation” and “Third-Generation Reds.”
Caijinglengyan claimed that many other Twitter accounts used by Chinese dissidents were suddenly suspended without notice. After he contacted them, he found that they had also criticized Li or started commenting about Li just before their accounts were banned.
The writer listed @beacon__news (灯塔爆料社) and @kevinheaven9 (Calvin看美国) as other Twitter users who found their Twitter accounts suddenly shut down. He claimed that one Twitter user simply wrote “Li Fei-Fei is coming, I have to run,” and soon found that both his primary account and secondary account had been suspended.
French-based Chinese dissident Wang Longmeng (王龍蒙) wrote that Twitter’s ban on those who criticized Li and exposed her background “was undoubtedly related to Li Feifei’s appointment as a director, because criticism and negative information were banned, which is Beijing characteristic,” reported Liberty Times. He believes that Twitter was quickly “dyed red” after Li took charge.
On May 20, a petition was created on the White House website titled “Call for a thorough investigation on Twitter’s violation of freedom of speech.” The creator of the petition wrote that Twitter is suppressing criticism of the CCP and suspending dissident accounts while pro-Beijing accounts remain unscathed.
The petition listed May 18 as a date when many “anti-CCP” Twitter users found their accounts permanently suspended. The author of the document pointed out Li’s involvement with Project Maven and alleged that she was engaged in extensive military-technical programs while running Google’s AI center in Beijing.
The document then alleged that Li continues to have “close ties with top leaders of the CCP.” The petition closed by calling on the U.S. government to investigate “Twitter’s violation of freedom of speech, and on Dr. FeiFei Li’s collaborations with the CCP, a threat to national security.”

From Wapo March, 2020:A senior scientist at a government biomedical research laboratory has been thwarted in his efforts to conduct experiments on possible treatments for the new coronavirus because of the Trump administration’s restrictions …

From Newsbreak:CLEARWATER, Fla. — In light of the Covid-19 pandemic, pharmaceutical companies are racing to provide a vaccine to prevent further spread of the disease. Unfortunately, Moderna, the company that has been recently touted in news…

From Zero Hedge: Eleven years before the joint construction of the Wuhan Institute of Virology, French intelligence services warned Paris that China’s reputation for poor bio-security could lead to a ‘catastrophic leak,’ according to the Dail…

Abdul Qadeer Khan the architect of Pakistan’s Nuclear Weapons Program told top court that he is being ‘kept prisoner’ by Pakistani agencies and not allowed to plead his case. In February, GreatGameIndia‘s exclusive reporting bus…

In a shocking claim the President of Madagascar has said that the WHO offered $20m bribe to poison COVID-19 cure. The herbal remedy called COVID-19 Organics made from Artemisia can cure COVID-19 patients within ten days said the President. He also rais…

(Natural News) According to a recent study published in BMC Complementary Medicine and Therapies, fermented barley extract is a promising l…

(Natural News) Researchers from the University of California, Riverside (UC Riverside) have shown that the way animal mothers nurture their…

(Natural News) After being strongly condemned by the pro-liberty, pro-health freedom movement, President Trump appears to be backing away f…

Air Force Col. Thomas Falzarano, who commanded the service’s 21st Space Wing, was found dead Tuesday at his home on Peterson Air Force Base in Colorado, service officials said Wednesday. The Air Force has opened an investigation into Falzarano’s death …