By RUSS WINTER of Winters Actionables
Obama canceled his scheduled meeting with Russian President Vladimir Putin last week. Although Obama didn’t give his reason for the cancellation, the media stoogery speculated it was because of Russia’s protection of whistleblower-patriot Edward Snowden. What is not being reported is that Russia has been warning its citizens and institutions since last March’s Cyprus bail-in to divest assets out of western banks.
Additionally, last week Yao Yudong of the PBoC’s monetary policy committee called for a new Bretton Woods system to strengthen the management of global liquidity. In an article in the China Securities Journal, Yao called for more power to the IMF as international cooperation and supervision are needed.
Because of the U.S. dollar hegemony, the lion’s share of all global dollar-denominated transactions pass through the New York. This includes those that have absolutely nothing to do with the U.S. In turn, these transactions are monitored by the New York State Department of Financial Services, which was created in 2011. This agency plays a special role in the exposure of bank and company wrongdoers, real or imagined.  Around 4,500 organizations, with assets of $6.2 trillion, are under the direct control of this agency.
This circumstance, the unnecessary power and the unlimited surveillance/invasion of privacy are powerful incentives for non-U.S. banks and companies to replace the U.S. dollar with the currencies of other countries when making international payments, while at the same time creating their own regional systems of international payments.
Thus, recent Western self-inflicted wounds have opened the Pandora’s box for China and Russia as well as other BRIC nations to pressure hard for non-dollar settlement of trade, and in particular oil. I submit that this agenda and the G20 meeting Sept. 5-6 is the venue for this to be revealed. THAT should be the real concern for the U.S., and it ties direct into my earlier article, China Maneuvers to take Away US’ Dominant Reserve Currency Status.
As far as the timing, there are just too many coincidences happening on the gold and other fronts to assume the yellow metal does not play a role here. Is it a coincidence that JP Morgan has literally cornered the gold market [see Banker's Participation Report].

The Shanghai Gold Exchange has had deliveries equal to the world’s production for months straight. 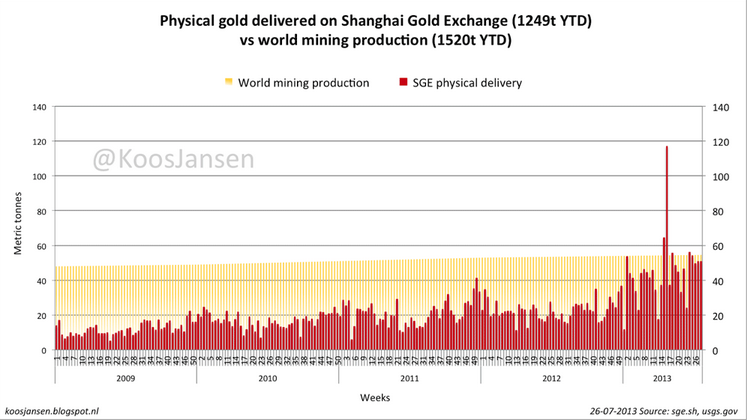 The Comex registered gold is only at a mere 2% of open interest. 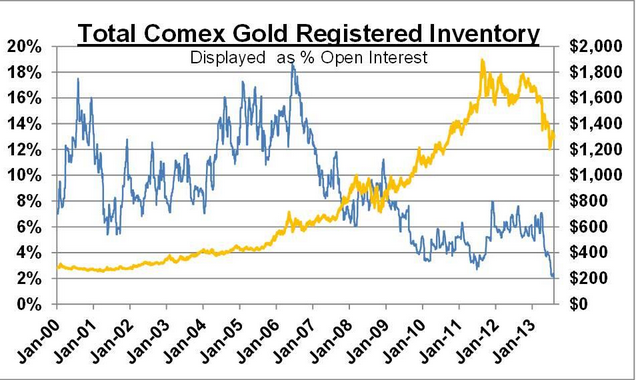 Chart source: Garrett Goggin
Is it a coincidence that GOFO has been negative for 25 straight days, and gold in backwardization?
Is it a coincidence that the stock market witnessed four Hindenberg Omens in the last week?
The end of Dollar hegemony is going to be a “gap” game-changer.
*Gold Forward Offered Rates:
When it is negative, you will receive more interest when you lease your gold than your dollars. Primarily it means that gold leased out today is worth more than the gold delivered at the end of the three months.
The negative GOFO rate means someone wants to get their hands on gold.  There is speculation that the elevated high levels of demand we’re seeing in Asia has emptied the London Market.