It feels like we’re in a very weird place when it comes to the stock market and economy. Speculative behavior abounds in the markets and that’s worrisome. But the economy is gearing up for perhaps a run of the best economic growth we’ve had in decades.

It’s difficult to square these two ideas. Maybe the stock market has been front-running the economy. Or maybe we’re overthinking this and an economic boom will be wonderful for the stock market.

To gain a better historical perspective of the relationship between economic booms and stock market performance, I ran the numbers and looked for past examples in a recent piece I wrote at Fortune.

It’s hard to believe it was only a year ago that the economy was essentially put on ice. There were quarantines. Shutdowns. Closures of businesses, schools, supply chains, and our everyday way of life. This led to the worst quarterly economic contraction on record in the second quarter of 2020, clocking in at an annualized –34%.

Yet somehow we are now on track for an economic boom.

Goldman Sachs analysts said in a recent outlook piece they now expect 8% economic growth in 2021 and an unemployment rate of 4% by year-end. They think the unemployment rate could reach as low as 3.2% by 2023. Treasury Secretary Janet Yellen thinks we could be back at full employment as early as next year.

Of course, there is a reason for this lightning-quick turnaround. The government has helped keep things afloat by spending and sending out gobs of money. Trillions of dollars have been sent to businesses, municipalities, and individuals, including the most recent $1.9 trillion stimulus bill.

So that enormous contraction was likely the fastest recession in U.S. history as well. And the sheer amount of government spending means we could see one of the biggest economic booms ever coming out of a downturn.

Investors have now gone from worrying about the potential for another Great Depression last March to the biggest risk being an inflationary spike from a combination of government spending, supply constraints, and pent-up demand as people get vaccinated.

Inflation can be harmful to the stock market, but it’s hard to imagine investors selling their stocks in the midst of an economic boom.

Has the stock market ever crashed as the economy soared?

It’s rare, but it has happened before.

Going back to the 1930s, which is essentially when GDP as a metric was invented, real economic growth in the United States has averaged roughly 3% per year. The stock market is not the economy, but there is a relationship between GDP growth and the market over time, especially when growth is high. 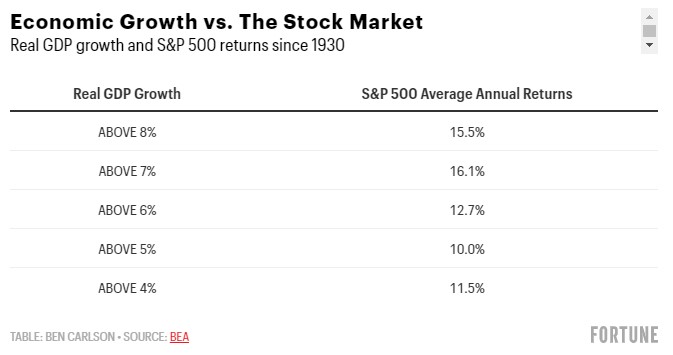 This is not a perfect relationship, but you can see the higher real GDP growth goes, the higher average annual stock market returns tend to go.

Averages can often hide outliers, and the one outlier here was 1937. Real GDP growth came in at over 5%, but the S&P 500 finished the year down 35%. However, one of the reasons stocks fell so hard that year is the economy began to slow by the end of the year, which led to a recession that lasted until 1938.

The highest growth with a down stock market came in 1941 when GDP was up double digits year over year while the S&P 500 finished the year down almost 11%. This was an instance in which investors were spooked from World War II.

Otherwise, stocks have generally seen strong returns when economic growth is so high. In seven out of the 11 years when real GDP growth was 8% or higher, the stock market was up double digits.

So it’s relatively rare for the stock market to fall concurrently with a booming economy.

There is the possibility of a “sell the news” reaction by investors now that the market is already up around 80% from the bottom in late March 2020. That is a risk worth considering.

However, betting against the stock market against the backdrop of what could be the strongest economic environment since the 1990s seems like an even riskier proposition.

This piece was originally published at Fortune