Rage Against the United States of Institutionalized Inequality and Injustice

The Great COVID-19 Vaccines to the Rescue Hoax

Russian Foreign Ministry on US Hostility Toward Moscow, America in Decline, US Nuclear Tests, and Nord Stream 2

The Brexit would change the dynamic of the EU.
Brexit is bad for the EU, not just the GBP.
A Brexit will impact all who deal with the pound.
Volatility peaking June 23 is guaranteed for GBP-related assets.
For Americans, a referendum is a vote whereby voters determine a political decision. America is largely a Representative Republic. Only some U.S. states, like California, have direct social democracy in which referendums determine state law.
There’s a referendum in Great Britain that can change the structure of Europe. The question in this case: Should Great Britain stay in the European Union, or leave? (The BBC has complete coverage of Brexit.)
In Britain, polls show the vote would lead to a stay — but it’s very close. From the Financial Times Brexit poll tracking:

Analysts agree a vote to leave the EU would cause major volatility, and the British Pound would decline. From CNBC:

A U.K. vote to leave the European Union on June 23 would cause major currency fluctuations and dent growth in the country, according to Ramin Nakisa, global macro strategist at UBS. He estimated it would have an approximately “2 percent impact on GDP (gross domestic product) in the U.K. over the long term.” However, the “biggest effect would be on FX (foreign exchange), so we’re saying euro/sterling would go to parity if there was an exit,” he told CNBC Friday.

For traders, the ETFs to watch are:
Or in your Forex account, watch all GBP pairs. The vote is June 23, and there is constant polling leading up to this historic vote, to gauge public sentiment.
Because the vote is so close, there’s tail risk to any assets connected to the GBP currency and to a lesser extent, to the EU. This will also affect the Euro (EUO, FXE).
The European Union is an idea. Great Britain is one of the periphery states that joined the EU but still uses its own currency. This leads to confusion: Is Britain in the EU or not? They are. That means they enjoy the privilege of traveling and doing business inside the EU without visas or permits, taxes, and other barriers that would exist were Britain not in the EU.
If they vote to leave, all that can change. It will be a net negative for the EU as well. Not only will the EU lose economically, it will send a message to other breakaway members: If Britain can leave, you can too! The EU is a fragile idea, and there exists in most European countries strong movements against the EU.
A short list of regions that have the potential to ‘breakaway’ and form their own states, outside the EU, from The Washington Post:
Venice (Italy), Catalonia (Spain), Corsica (France), Flanders (Belgium), The Basque Region (Spain), Bavaria (Germany), Wales, Cornwall, Northern Ireland (The United Kingdom), Galicia, Aragon (Spain), Silesia (Poland), Frisia (Netherlands, Germany), Sardinia, Brittany, Occitania, Alsace, Savoy (France), and Aaland (Finland).
A yes vote on Brexit could break the threads holding the EU together. Again, the EU is an idea, an economic business plan, and as such it relies on the consensual participation of its members. As explained in Splitting Pennies, Forex is a derivative, just like the EU, an idea that underpins the euro. Ideas can unravel, and if the euro idea unravels, it could lead to a return of European national currencies like the Italian lira, French franc, Spanish peseta, and so on. A country is a currency. Britain maintained their currency and stayed part of the EU. But now, if they completely leave, it will further destabilize the euro.
And most UK companies have no Brexit plan:

The boards of many of Britain’s largest listed companies have made no contingency plans for a possible Brexit amid polls showing rising public support for leaving the European Union. The Financial Times contacted every FTSE 100 company, and only four- Easyjet, Persimmon, GKN andStandard Life – said they were engaged in detailed planning for a Brexit. Asked what measures it was taking to prepare, Vodafone, on the other hand, said “none of note required”.

Europe often will surprise us, and investors would have been wrong betting against the will of the people. Investments in GBP companies can be partially hedged by trading.
On a longer-term view, the GBP is down from its highs, as seen on this chart: 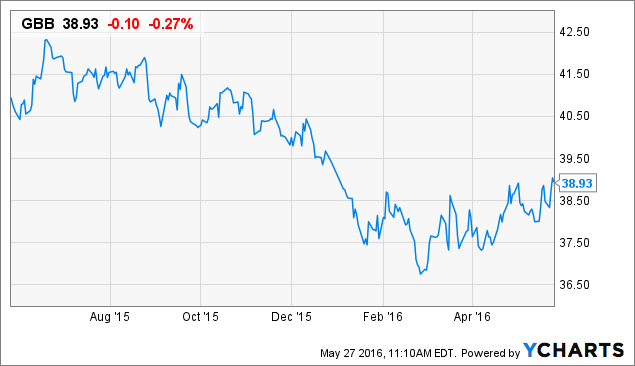 GBB data by YCharts
A vote to leave the EU could see the pound go down even further. But it’s more likely Britain will stay. If Britain votes to stay, the pound could shoot back up near its highs. Investors should stay tuned to the Brexit channel, because this will be a great straddle trade opportunity, with guaranteed volatility no matter what the outcome of the vote.
http://seekingalpha.com/article/3978288-brexit-will-take-euro-along-gbp