CHINA MANEUVERS TO TAKE AWAY US’ DOMINANT RESERVE CURRENCY STATUS [12]

by RUSS WINTER [13]
“All warfare is based on deception.” – Sun Tzu, “The Art of War” (500 B.C.)
“The message of this initiative is for China to consider whether or not China would open up its banking system and allow the strongest currency in the world, which is the Chinese yuan, to be the rightful and anointed convertible currency of the world.” – Thailand Deputy Prime Minister Olarn Chaipravat in an interview with Bloomberg
“An international monetary system dominated by a single sovereign sovereign currency has intensified the concentration of risk and the spread of the crisis.” — People’s Bank of China (2009)
It should go without saying that China and Russia have designs to end the U.S. Dollar hegemony free ride. This is fundamental to understand and will be a game changer. The impacts on the standard of living of these players will be profound and especially negative for the U.S. How and in what manner this plays out is the question. I strongly believe that the answer lies in two parts: letting the U.S. put a noose around its own neck and then at the appropriate time, kicking the chair out from under it.
The first part of the operation is now advanced and is described below. The second part involves China and Russia preparing its relative currencies to be accepted in lieu of dollars. It means making the yuan and ruble at least equal to, if not superior to, American dollars in world trade. As you can imagine, the U.S. — a country with a debt-to-GDP ratio approaching 110% — can ill afford this sort of challenge to its status as a reserve currency.
China has already advanced the Yuan as a principal exchange currency by incorporating a series of deal with other countries. Such arrangements are hardly mentioned by U.S. financial media, but they are going on constantly. So far, the People’s Bank of China (PBOC) has signed nearly 2 trillion yuan worth of currency-swap deals with 20 countries and regions, including Hong Kong. Here’s a breakdown of happenings:

I suggest that the kicking the chair out from USD hegemony involves at least partially backing the Yuan, and Ruble for that matter, with gold. China’s reserve assets were 30.2% of the world total at the end of last year. How much of this is already in gold?
China is secretive about the number, I think it’s because it had some catching up to do and it’s incorporating Sun Tzu-style principles, namely deception. The last time China revealed its gold reserve levels was in 2009 at 1,054 tonnes, which caught the market by surprise.
Another reference point is that China’s foreign exchange reserve increased from $2.2 trillion in 2009 to $3.4 trillion today. During that period, U.S. dollar reserves held by China fell from 69% to 54%.  If only 10% of that $1.2 trillion increase went to gold, then let’s see … At an average price of $1,200, that would be nearly 3,000 tonnes, bringing China’s total gold holdings up to 4000 tonnes. Conventional wisdom would point to between 3,000 and 4,000 tonnes. The U.S. supposedly has 8,133 tonnes in its reserves. Russia has doubled its gold reserve in four years. 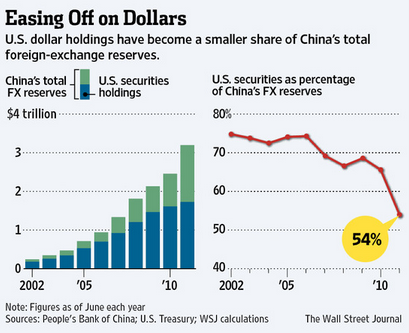 China’s mines produce an average of 350 tonnes per year. During the last four years, it has produced 1,400 tonnes. Certainly, its domestic production went toward its reserve. Production estimates for 2013 are 440 tonnes. It should be noted, however, that from 2002 to 2009 China had produced approximately 1800 metric tonnes of gold, which strongly suggests that its figure of 1,054 tonnes for 2009 is understated and deceptive, maybe by a factor of two to three times.
Between 2011 and 2012, imports into China via Hong Kong surged to a total of 950 tonnes. Some, but possibly the majority of this ended up in gold reserves. Furthermore, no one talks about “illegal” gold imports smuggled into China, which may add to the total. 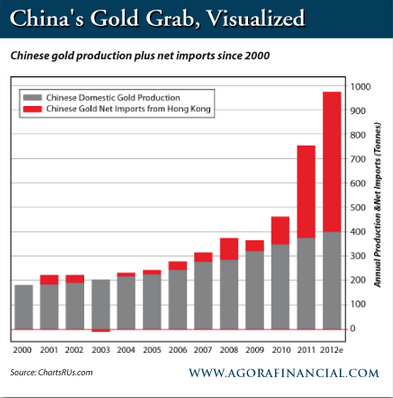 ?
This year, the gold grab has reached entirely new levels, no doubt just one of the “unintended consequences” of the gold short attack in the paper “market.” In the first five months of this year, China imported more than what it did for all of 2011, or 525 tonnes.

Another incredible number is the volume of ounces transferred out of the London bullion market (LBMA) in May. That month alone it increased to 28.2 million ounces. To put that in perspective: 28.2 million troy ounces translates into 877 metric tonnes of gold. The amount of physical gold delivered year to date on the Shanghai Gold Exchange is 1,198 tonnes. Again, it’s much more than one would expect of the appetite of institutions, banks and individuals. The “Chinese granny” investor story is overplayed and may be a bit of a decoy. Much of this are PBoC and their proxies.

In 2009, a Chinese state council adviser known simply as “Ji” said that a team of experts from Shanghai and Beijing had set up a task force to consider expanding China’s gold reserves. Ji was quoted as saying, “We suggested that China’s gold reserves should reach 6,000 tons in the next three to five years and perhaps 10,000 tons in eight to 10 years.”
The numbers I’ve cited are consistent with China easily reaching the Ji gold holding of 6,000 tonnes this year. The kind of withdrawal numbers being reported out of the LBMA, Comex and GLD (418 tonnes YTD) suggest that the PBOC through it’s proxy, the State Administration of Foreign Exchange (SAFE), is involved in a physical gold raid of such magnitude that the 6,000-tonne target has been left in the dust. The great gold sale has facilitated a push heading closer to 10,000 tonnes.
More importantly, as long as gold prices remain suppressed, China will continue to be a large-scale buyer. Perversely, if gold prices remain low, it will serve to accelerate the timeline for China to take down USD reserve currency hegemony. The U.S. can ill afford a China gold reserve buildup of 1,000 tonnes or more a year, let alone raid 2,000 tonnes and at cheap prices.
Meanwhile, China reportedly is progressing well on its ambitious plan to recast large gold bars into smaller, 1-kilogram bars on a massive scale. The big gold recast project points to the Chinese preparing for a new system of trade settlement. In the process, they are constructing a foundation for a new gold-supported monetary system that will give them advantages to their trade payments.
Finally, higher gold prices are necessary if the U.S. wants to curb China demand and prevent an emperor-wears-no-clothes scenario on the home front. You see, once yuan becomes a currency fully backed by gold, the next logical step will be not just domestic but international pressure on the U.S. and others, like Germany, to lift the iron curtain and reveal whether the gold they claim backs their currency really exists. Then get ready for all hell to break loose.
http://www.zerohedge.com/print/476704