Now that the multi-year saga of German fintech megafraud Wirecard is finally over, the pain is only just starting for disgraced German regulator BaFin (with the EU launching an investigation into its borderline criminal "regulation" which punished short sellers while never once looking at the real fraud).
Also let's not forget about the company's "auditor" EY (aka Ernst & Young), which as we learned today could have caught the WireFraud years earlier... if they had only done their damn job.
Which brings us to the next point: who is the next WireCard? To be sure in a time of frenzied buying where fundamentals don't matter (thanks Fed) and lax auditing standards in a world where stocks just go up no matter the news, it is only a matter of time before the other cockroaches are spotted.
One obvious place to start is a look at the other EY clients, which reveals something fascinating: virtually every company that is at the forefront of S&P500 leadership is currently a client of the disgraced auditor: from Apple, to Amazon, to Alphabet and Facebook! The four biggest and most popular companies in the world are currently audited by a company that ignored billions in missing cash for years. In fact, one could go so far as to say that if there is fraud in any one of these 4 names, it could singlehandedly unleash the next market crash.
The list of EY's top clients is shown below (ranked by market cap). 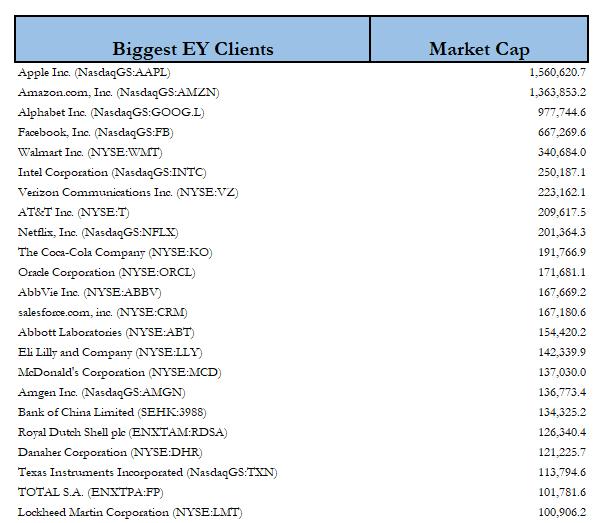 One wonders: if the rating agencies were the permissive factor for the 2008 crisis, will shoddy auditors be the straw that finally bursts the biggest bubble of all time?
But while that is certainly an important discussion, we will save it for another time, and instead shifting back to the most likely next usual suspect to implode under its own fraudulent weight, we go to a report published overnight by Neil Campling of Mirabaud Securities - best known for being the only analyst to correctly have a price target of zero for Wirecard - titled the next "Big Disaster" and which lists 20 warning signs to watch out for when seeking to short the next WireFraud.

1. Massively promotional CEO who actively looks for publicity and spends a lot of time courting Wall Street/investors etc and is very media savvy
2. Huge CEO/Senior Management compensation package NOT tied to cash flow or Earnings but just to Sales and/or the stock price, creating the possibility of egregious wealth creation if the stock goes up a lot. Huge pledging of collateral by the CEO in return for margin loans to fund a billionaire lifestyle
3. Management compensation generally way out of line with peers despite notably less profitability
4. Glossy future projections that have a habit over a long period of being proven to be too optimistic
5. Questionable product quality, ie defects (boon??) or debatable technological leads over similar products
6. Some evidence of self certifying, whether it be through strange international subsidiaries or not having an Auditor or experiencing unusual and slightly sudden end of quarter surges in revenues, up to and including the last day
7. Unusual or unverified and large Receivables in a business where the product is exchanged for cash up front
8. Evidence that the company is existing on a shoestring, not paying Suppliers, Employees, Landlords etc
9. Unusual margin progression, with SG +A going down over time despite a rising global footprint, or GM's staying flat despite much lower ASP's over time, for instance.
10. High levels of Gross Debt. Cash balances not matched by notable Interest Income thereby suggesting they are fraudulent
11. High employee turnover, especially in the LEGAL and FINANCE areas. Co-founders or Board members leaving.
12. Aggressive pursuit via paid third parties and/or “heavies” of any critics or people who have too many questions, which in any case are “boring”
13. Dislike of Hedge Funds
14. Possible Narcissistic Personality Disorder on the part of the CEO. Additional points if he/she uses Twitter a lot
15. Large cabal of outcasts/weirdos/bloggers/Twitter groups who have been saying for years that everything is amiss but just get a lot of criticism because the stock keeps going up ergo they must be idiots
16. Slowing top line growth rate despite all the hoopla and supposed “growth stock” status. Evidence of competitors rapidly eroding unsustainably high market share.
17. Loss making. Ideally never made a profit but likes to pretend it did or failing that, that it will for sure in 2-3 years due to highly questionable new products. But the 2-3 years gets pushed out constantly
18. Extensive use/exclusive use of NON-GAAP Accounting and occasional bridging to get from a Net Loss to a (small) Net Profit via poorly explained one-offs/Other Items/unusually large Credits of some kind in a desperate attempt to get into an Index by illicit means
19. Weak Board, preferably also small and ideally in hock in some way to the CEO, who therefore do his/her bidding. Helps if some of them are related physically to the CEO.
20. Gullible media, gullible analysts and dozens of paid bloggers who produce Price Targets out of nowhere based on “Option Value” or put another way products that are at least 5 years away from having any material impact.

There is one very famour company that checks every single one of the above boxes. In fact, it is a name that is very familiar to our readers. Which is why the only question we have at this point: is PWC starting to sweat?