SHUT THEM DOWN: It’s time to end the tyranny of Big Tech censorship in America

Nearly Half Of Small Business Owners Expect To Close Down Permanently

At a moment in time when narrative-following "scientists" are lauded like unquestionably omniscient supreme beings enabling dumb-as-a-rock-partisan-politicians to play omnipotent overlords without fear of blowback, the world needs more people like William Haseltine. 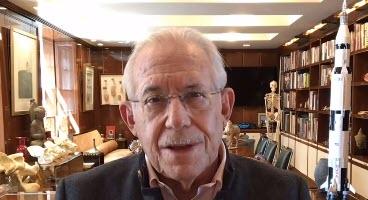 The last two weeks have seen markets and politicians jump exuberantly at the hope of every press release from a biotech firm that proclaims one of their pet rabbits didn't die when they fed it their latest DNA-reshaping test material (oh that is except if anyone dares say anything positive about hydroxychloroquine but that is a topic for another discussion) as the fate of global citizenry rests on a vaccine (and definitely not herd immunity, don't even mention it).
Barstool Sports' Dave Portnoy said it right - when did we shift from "flatten the curve, flatten the curve, flatten the curve" to "we have to fund a cure or everyone's going to die."
And so, that is where we find ourselves... Every talking head proclaiming the same malarkey - we will re-open carefully, with PPE, and social distancing, and whetever else is mandated from on-high "until we find a vaccine in 12-18 months" at which point the world will be made whole again and Kumbaya...
All of which brings us back to the man of the day in our humble opinion.
Former Harvard Medical School professor and founder of the university's cancer and HIV/AIDS research departments, William Haseltine dared to speak out today about the high level of bullshit and damage that is being done to "trust" in "scientists" and even dared to break the one holy writ that shall go un-mentioned, throwing some shade a Dr.Fauci.
Reflecting on Moderna's press release this week (which was immediately followed by massive equity raises across numerous biotech firms and upgrades from the underwriters, surprise), Haseltine said:

"If a CFO had tried to get away with such an opaque and data-less statement it would have bee treated with derision and possibly an investigation."

The CNBC anchor desperately tried to guilt him into the official narrative of clinging to any hope as long as it lifts stocks - no matter its utter bullshittiness - but Haseltine destroyed her naive party line:

"we all know its an emergency, and in an emergency it's even more important to be clear on what you know and what you do not know."

But, but, but... the CNBC anchorette blubbered, "are you questioning Dr. Fauci who also said that this was encouraging news?"

"Whether [Fauci] shaded what should should have been done, I think is an important question. He's obviously under enormous pressure for positive results but it was not the right thing to do if you can't see the data."

The full interview below is a must-watch by all who care about their freedom being controlled by a narrative directed by fearmongering elites in the name of "science" when the "science" is a) being ignored, b) being bastardized to meet a political need, c) being treated as if handed down on high from the man himself, or d) being manipulated explicitly.
Why this former Harvard Med School prof says Moderna's vaccine trial 'publication by press release' from CNBC.
Haseltine's interview is perfect lead into his opinion piece in todays' Washington Post:
Faith in medicine and science is based on trust. But today, in the rush to share scientific progress in combating covid-19, that trust is being undermined.
Private companies, governments and research institutes are holding news conferences to report potential breakthroughs that cannot be verified. The results are always favorable, but the full data on which the announcements are based are not immediately available for critical review. This is "publication by press release,” and it’s damaging trust in the fundamental methods of science and medicine at a time when we need it most.
The most recent example is Moderna’s claim Monday of favorable results in its vaccine trial, which it announced without revealing any of the underlying data. The announcement added billions of dollars to the value of the company, with its shares jumping almost 20 percent. Many analysts believe it contributed to a 900-point gain in the Dow Jones industrial average.
The Moderna announcement described a safety trial of its vaccine based on eight healthy participants. The claim was that in all eight people, the vaccine raised the levels of neutralizing antibodies equivalent to those found in convalescent serum of those who recovered from covid-19. What to make of that claim? Hard to say, because we have no sense of what those levels were. This is the equivalent of a chief executive of a public company announcing a favorable earnings report without supplying supporting financial data, which the Securities and Exchange Commission would never allow.
There is a legitimate question regarding what Moderna’s unsupported assertion means. The scientific and medical literature reports that some people who have recovered have little to no detectable neutralizing antibodies. There is even existing scientific literature that suggests it is possible neutralizing antibodies may not protect animals or humans from infection or reinfection by coronaviruses.
Such “publication by press release” seems to be a standard practice lately.
The National Institutes of Health announced last month that the drug remdesivir offered a clear benefit to covid-19 patients with moderate disease, shortening the length of their hospital stay by several days. But did it really? Twenty days after the announcement, the supporting data has still not been published. Without the data, no doctor treating a patient can be sure they are doing the right thing.
Another paper, published the same day, found that remdesivir had no measurable effect on patient survival or the amount of virus detectable in nasopharynx and lung secretions. What then should a practicing physician do? Follow the unsupported advice of a news announcement or a medical report published in a leading scientific journal? This is not an idle question: The NIH announcement triggered a global stampede for limited supplies of the drug.
The case is more nuanced for the vaccine developed by the Jenner Institute at Oxford University, though the mileposts remain the same: It started with a public pronouncement of favorable results from an early study, this time in monkeys, well before any data was publicly released. An NIH scientist working on a trial of the Oxford vaccine gave an interview to the New York Times, claiming the drug was a success.
But the data, released as a prepublication version more than two weeks after the story ran, didn’t quite live up to the early claim. All of the vaccinated monkeys became infected when introduced to the virus. Though there was some reduction in the amount of viral RNA detected in the lungs, there was no reduction in the nasal secretions in the vaccinated monkeys. So the positive result reported by the Oxford group turned out not to be protection from infection at all, something most would agree is what a successful vaccine would do. Instead, it lowered only the amount of virus recoverable from the vaccinated monkey’s lung.
To the Jenner Institute’s credit, it does warn visitors to its website that there have been many false reports about the progress of its vaccine trial. Still, having a scientist working on the trial paint preliminary results in such a positive manner without having yet released the full data is cause for concern.
We all understand the need to share scientific and medical data as rapidly as possible in this time of crisis. But a media announcement alone is not enough. There are ways to share the data quickly and transparently: posting manuscripts before review or acceptance on publicly available websites or working with journals to allow an early view. Publishing in this manner allows doctors and scientists to reach their own conclusion, based on the evidence available.
The media also bears responsibility. Asking experts to opine on unsubstantiated claims is not useful. Medicine and science are not matters of majority opinion; they are matters of fact supported by transparent data. This is the backbone of scientific progress and our only hope to end this pandemic. We can’t give up on our standards now.
*  *  *
So, by all means, trust in "science" but choose your "scientist" well...
Securities Class Action