At the end of January, when the Reddit revolt was wrecking havoc among hedge funds and forcing even market neutral quants to degross and delever, we pointed out something unexpected: according to the latest HSBC Hedge Fund performance tracker, Renaissance's public funds - RIEF and RIDA - had a dismal 2020, losing 20% and 32% respectively, while the Renaissance Institutional Diversified Global Equities Fund (RIDGE) lost 31% as Rentec's famous quant algos were thrown out of whack by swings the computers had never seen or experienced before (which is not to say that RenTec's private, internal "friends and family-only" Medallion fund suffered a similar fate, quite the opposite).

This prompted us to ask "what the hell is going on in Setauket" (where RenTec's HQ is located), a question which gained even more urgency once we found out that the dismal streak of the world's largest quant fund (RenTec manages around $60BN) had continued into 2021, when its funds were the top and 5th worst performers overall in January (while Senvest was by far the best on the back of its $700 million gain from going long GME stock). 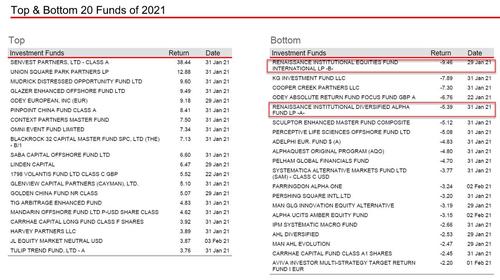 It turns out we were not the only ones closely watching the dismal recent returns at the world's most profitable hedge fund, because as Bloomberg writes this morning, the "investing giant that just posted its worst-ever returns across its public funds, has been hit with at least $5 billion in redemptions", a staggering reversal in fortune for a fund which always had a line of people around the corner just waiting to get be admitted.

According to the report, after clients pulled $1.85 billion across the three hedge funds in December (RIEF, RIDA, RIDGE), they also hit the Jim Simons' money machine with another $1.9 billion in January, and are poised to yank another $1.65 billion this month. While those figures could be offset if there are any inflows in February or if investors decided to walk back any of their redemption requests, that does not seem very likely after the staggering underperformance of the quant hedge fund. 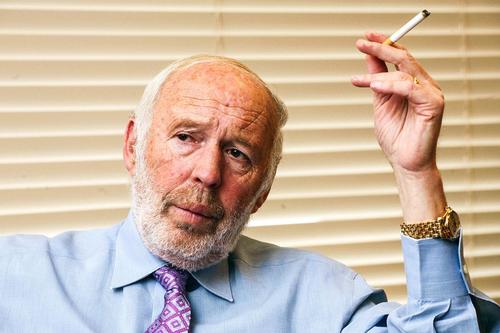 Of course, for RenTec founder and former codebreaker Jim Simons none of this matters, because while the public facing funds are a convenient hedge, in the grand scheme of things they are tiny; the real money at Rentec is made at Medallion - the iconic fund reserved for employees and insiders - and in 2020 it soared 76% last year, according to Institutional Investor.

This kind of discrepancy between internally managed funds and capital run for outside investors is truly unprecedented, and should prompt at least one regulator to ask what is going on. The last time they did, they found that another iconic fund - Michael Platt 's BlueCrest - had secretly transferred its best traders from managing outside capital to just running the firm's own money, while assigning crappy algos to "manage" outside money by piggybacking on internal trades after they were already put on (Platt received a $170MM slap on the wrist and all was forgotten).

In other words, as we explained in December, "when managing its own money, the macro fund would dedicate its best traders to come up with the top trades, and not only that but it would effectively frontrun its clients! Then, when the time came to manage client money, BlueCrest basically used a simply copycat algo to piggyback on its top trades but only after the management team was already in the positions, thus giving it substantial firepower to generate alpha simply by having billions in fund flows rush into the same trades it had already put on, creating a feedback loop. We wonder if BlueCrest also unloaded its own positions by selling them to its own clients."

Surely RenTec would never abuse its fiduciary duty so blatantly as to allow Medallion to frontrun the public fund trades... Surely.

Back in September, Renaissance told clients that its losses were due to being under-hedged during March’s collapse and then over-hedged in the rebound from April through June. That happened because its trading models “overcompensated” for the original trouble (translation: RenTec's models had no idea what they were doing).

Renaissance then again addressed its dismal returns in a December letter, which Bloomberg got access to:

“Although recent performance has been terrible and worse than prior performance would have suggested was likely for 2020,” the firm said, its model “anticipates that in track records as long as ours, some risk-return ratios every bit as bad as the ones we are now seeing are not shocking.”

The broader lesson is that “one should expect even good investments to perform horribly from time to time.”

Well, the returns may have been "terrible" for anyone who foolishly assumed that Simons & Co. would put the same care in managing outside money as they allocate to their own funds. Because while most outside investors have lost over a third of their investment in the past year, RenTec's internal Medallion fund is up nearly 80% in the same period. How much longer will this divergence continue, we wonder, before someone asks the obvious question: why?