As far as Bank of America is concerned, there are just two themes one needs to know to explain the current "market" (which as the same Bank of America explained last week, is now manipulated to a never before seen extent): the Great Repression and Great Debasement.
First the Great Repression - also known as "Don't fight the Fed" -  which according to BofA CIO Michael Hartnett is the outcome of $8 trillion in central bank asset purchases in just three months in 2020, has crushed interest rates, corporate bond spreads, volatility & bears. The most perfect example of this repression: the US fiscal deficit soared from 7% to 40% of GDP in Q2’20... 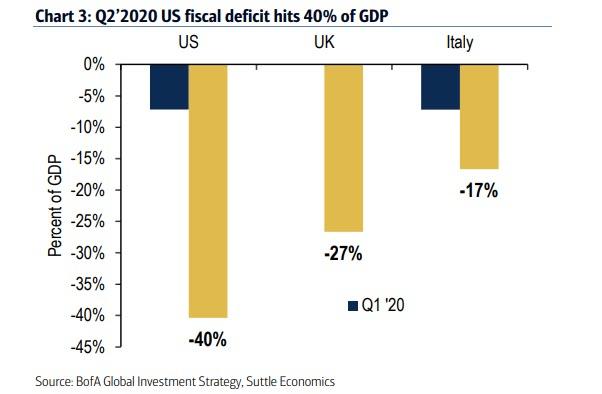 ... and less than one month later the volatility of US Treasury market fell close to all-time low. 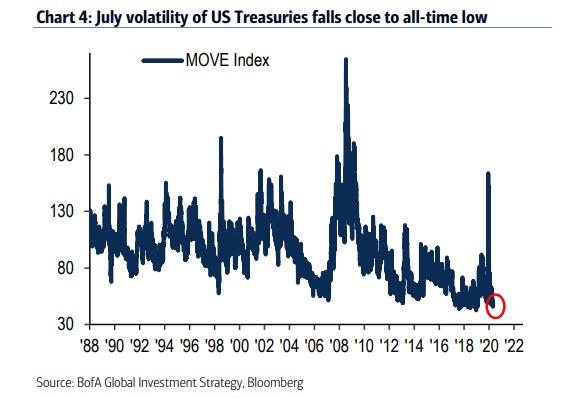 Besides volatility, central bank repression works its magic on yields: case in point Italian & Greek 10-year government bonds which are down to 1%, while US Commercial Mortgage Backed Securities (CMBS) & IG corporate bonds down to 2%, meanwhile the 30-year US mortgage rate just dropped to a record all time low of 3%.

As a result of this unprecedented repression (of reality), the Fed has made everyone a winner:

Fed has made bulls in every asset class a winner…gold, bonds, credit, stocks, real estate all up big since March lows; levered cross-asset risk parity strategy at all-time high.

It also means that BofA's recently preferred "All-weather" portfolio consisting of equal parts of all assets, i.e., 25/25/25/25 stocks, bonds, cash, gold, is up a record 18% in the past 90 days (Chart 7), which is "astounding & abnormal" given 7% historic annual average.

This "can't lose" market has also led to fundamental shift in the zeitgeist, as the traditionally bearish narratives of Q2 such as a Democratic sweep, end of globalization, Japanification, narrow “lockdown” leadership of growth stocks is paradoxically morphing into bullish narratives. Here, Hartnett reminds is that "when the only reason to be bearish is there is no reason to be bearish" that's when you sell. And sure enough, recent market moves justify getting defensive: the global equity market cap has round-tripped from $89tn to $62tn back to $87tn, with BofA warning that it is "hard to see financial conditions getting incrementally easier in July/Aug period of “peak policy” stimulus; summer dip in risk assets (e.g. SPX to 3050) likely."
And yet, all good times come to an end - otherwise the Fed would have printed its way to utopia decades ago - and the with Great Repression in full force, it also means that the Fed is currently pursuing a just as Great Debasement.
Echoing something we have also said, namely that with the bond market now nationalized by the Fed and no longer providing any useful inflationary (or deflationary) signals, the only remaining asset class with any sort of discounting qualities is gold...
... Hartnett writes that interest rate repression means "investors can't hedge the inflationary risk of $11tn of fiscal stimulus via "short bonds"…so investors crowding into "short US dollar", "long gold" hedges.
Indeed, US dollar debasement is well underway as the default narrative for US economy with excess debt, insufficient growth, and maxed-out monetary & fiscal stimulus. However, local currency debasement is also underway everywhere else, and so the next market crisis will lead to an even bigger spike in the dollar as global monetary authorities are faced with an even bigger global synthetic short squeeze than the one which sent the USD soaring to all time highs in March.
Which is why shorting the dollar to hedge debasement may be profitable for a while but eventually lead to catastrophic consequences.
That leaves long gold as the only natural hedge to the central bank "all in" bet of kicking the can until something breaks. That something will likely be gold exploding higher first above $2,000... then $2,500... then $3,000 at which point the Fed's control over fiat currencies, as well asthe illusion that there is no inflation, and the financial regime will finally collapse.
As Hartnett condludes, "the correct historical analog is the late-1960s when themes of “smaller world”, “bigger government”, “monetary & fiscal excess” led to positive nominal returns but also inflection up in inflation. 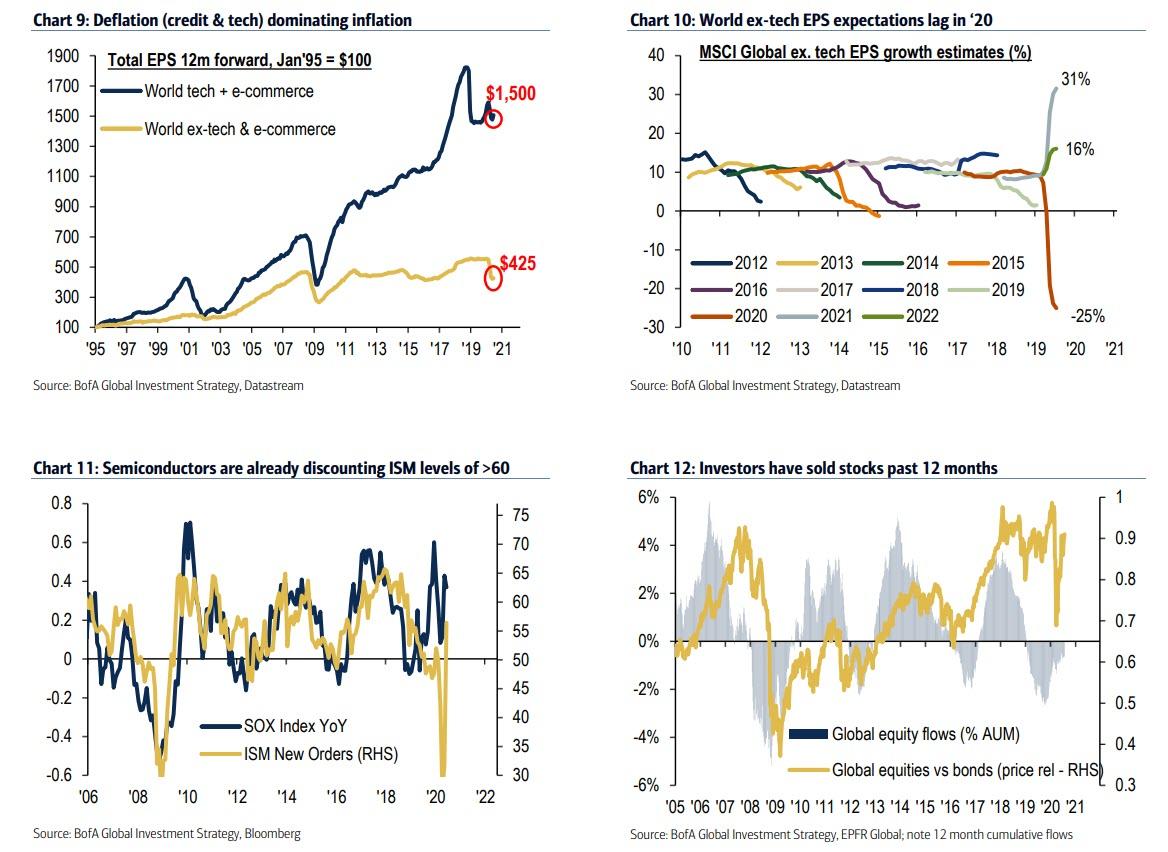 yet in 2021 GDP in dollar terms forecast to rise $1.3tn in China, $767bn in EU+UK, versus $612bn in US; global fiscal stimulus the other big 2020 trend...supports rotation from deflation to inflation...and traders note semiconductor stocks are already discounting ISM levels of >60 (Chart 11).

Finally, one look at the price of gold - which just closed at an all time high... 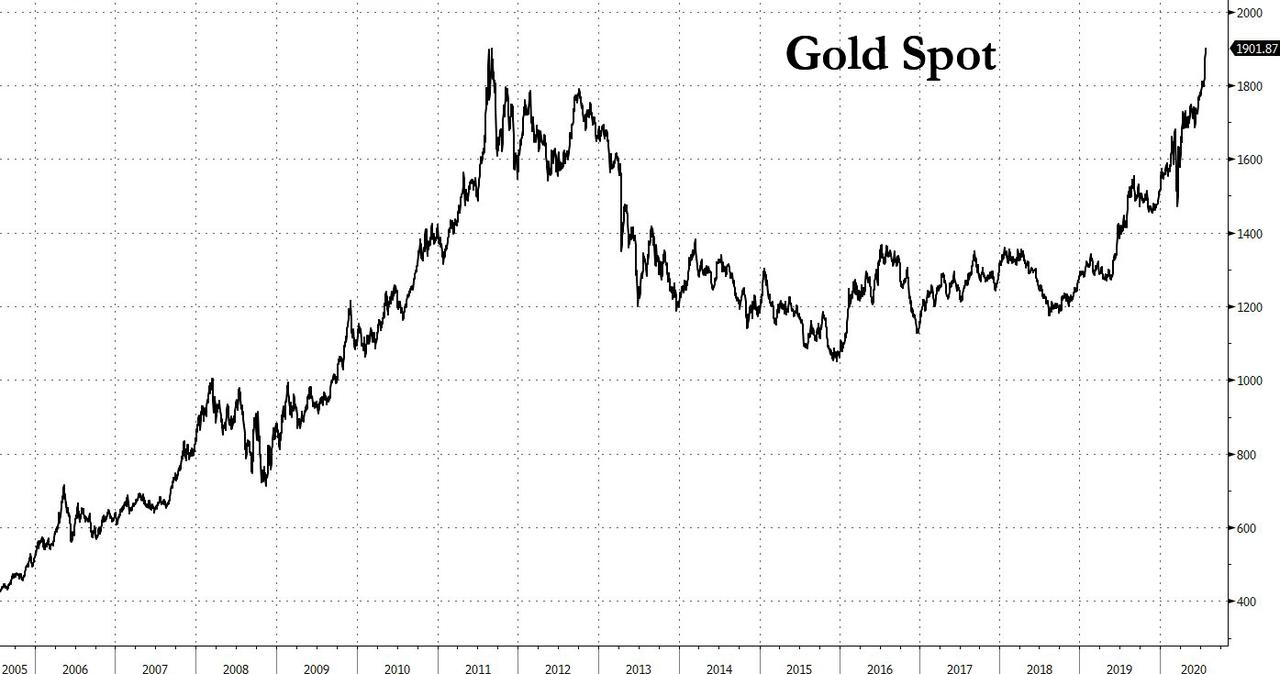 ... and it becomes clear that it is now just a matter of time before the financial world as we know it, will end.