The Military And State Can’t Handle The Trump Truth

Deployment of Russia’s hyper-sonic missiles is causing heartburn in the West.

From Zero Hedge 1/2/2020
The Fed's charter prohibits its from directly purchasing bonds or bills issued by the US Treasury: that process is also known as monetization and various Fed chairs have repeatedly testified under oath to Congress that the Fed does not do it. Of course, the alternative is what is known as "Helicopter Money", when the central bank directly purchases bonds issued by the Treasury and forms the backbone of the MMT monetary cult.
But what if there is at a several day interval between Treasury issuance and subsequent purchase? Well, that's perfectly legal, and it's something the Fed has done not only during QE1, QE2 and QE3, but is continuing to do now as part of its "QE4/NOT QE."
Here's how.
On December 16, the US Treasury sold $36 billion in T-Bills with a 182-day term, maturing on June 18, 2020, with CUSIP SV2. And, as shown in the Treasury Direct snapshot below, of the total $34.3 billion in competitive purchases, Dealers acquired $23.7 billion. 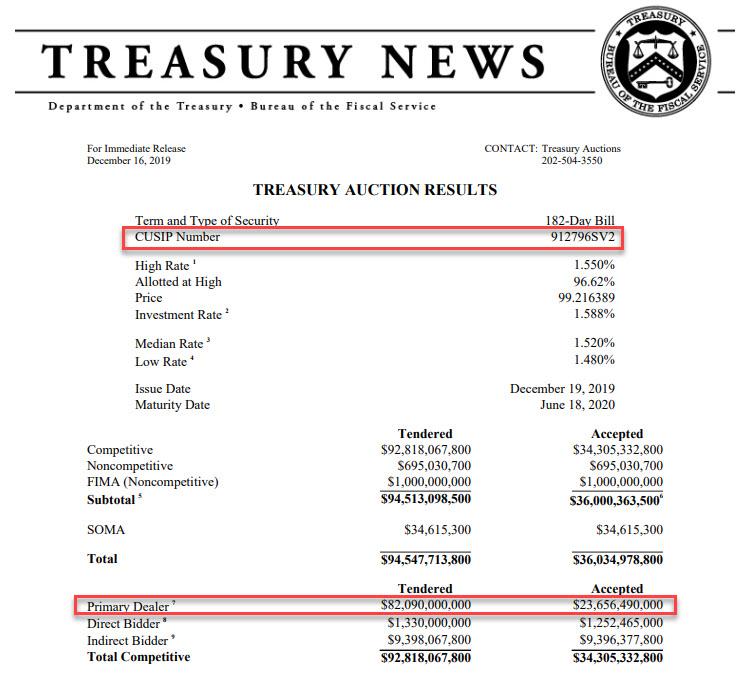 What happened next?
For the answer we go to the Fed's POMO page, which shows which specific T-Bill CUSIPs were purchased by its markets desk on any given POMO day when Dealers sell up to $7.5 billion in Bills to the Fed.
Exhibit 1: on December 19, just three days after the above T-Bill was issued and on the very day the issue settled (Dec 19), Dealers flipped the same Bills they bought from the Treasury back to the Fed for an unknown markup. Specifically, of the $7.5BN in total POMO, the SV2 CUSIP which had been issued earlier that week, represented the biggest bond "put" to the Fed, amounting to $3.9 billion, more than half of the total POMO on that day, and by far the most of any CUSIP sold to the NY Fed's markets desk on that day. 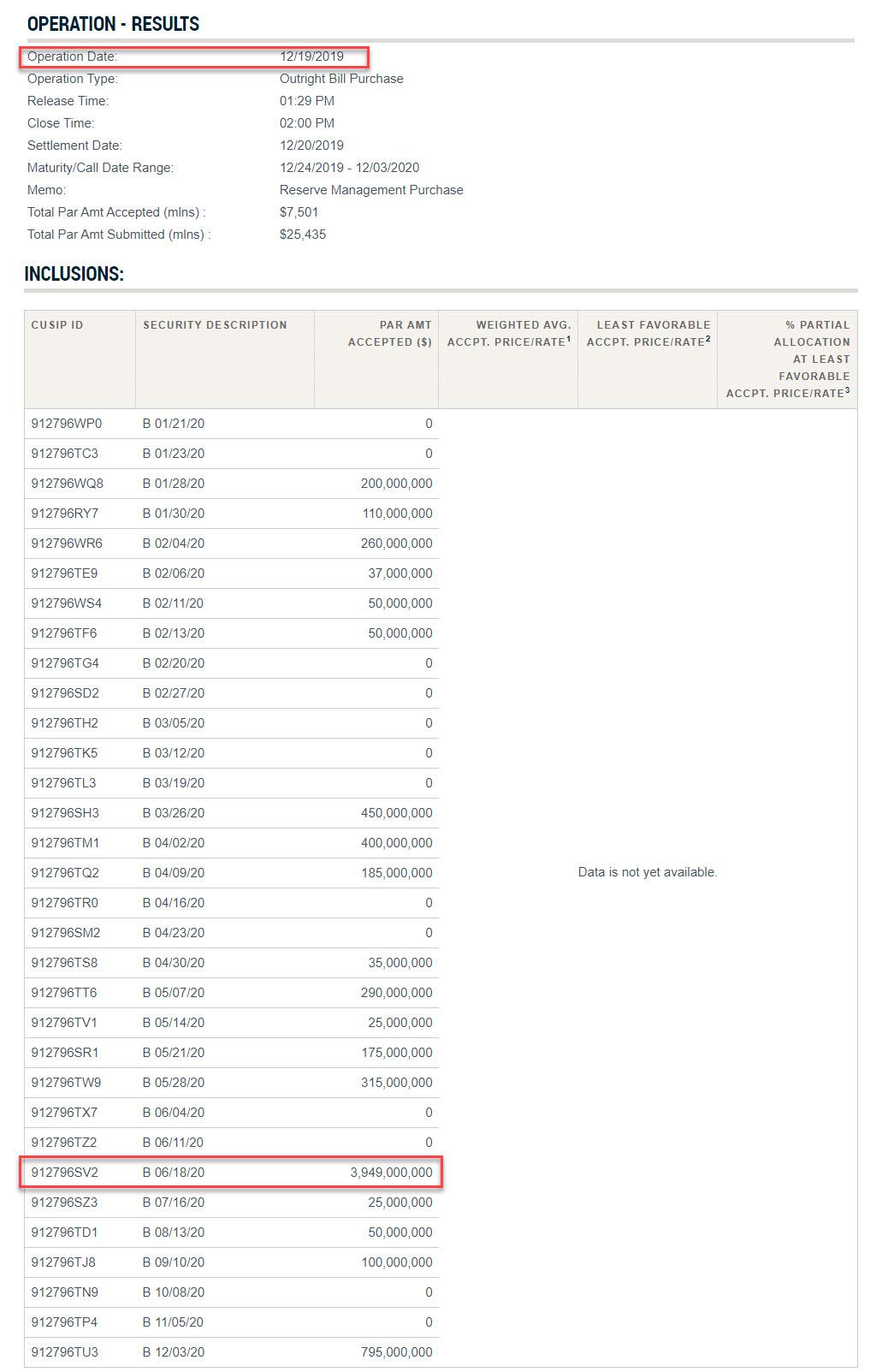 But wait, there's more.
Exhibit 2: during the next POMO conducted the very next day, or December 20, and just four days after the issuance of T-Bill SV2, which as a reminder saw $23.7 billion in Dealer purchase, those same Dealers flipped more of the same Bills they "bought" from the Treasury back to the Fed. Why? To once again pocket the unspecific markup the Fed generously provided to them just because they are Dealers. Of the $7.5BN in total POMO held on Dec 20, the SV2 CUSIP once again represented the single biggest bond "put" to the Fed, amounting to $1.6 billion, the most of any CUSIP sold to the NY Fed's markets desk on that day. 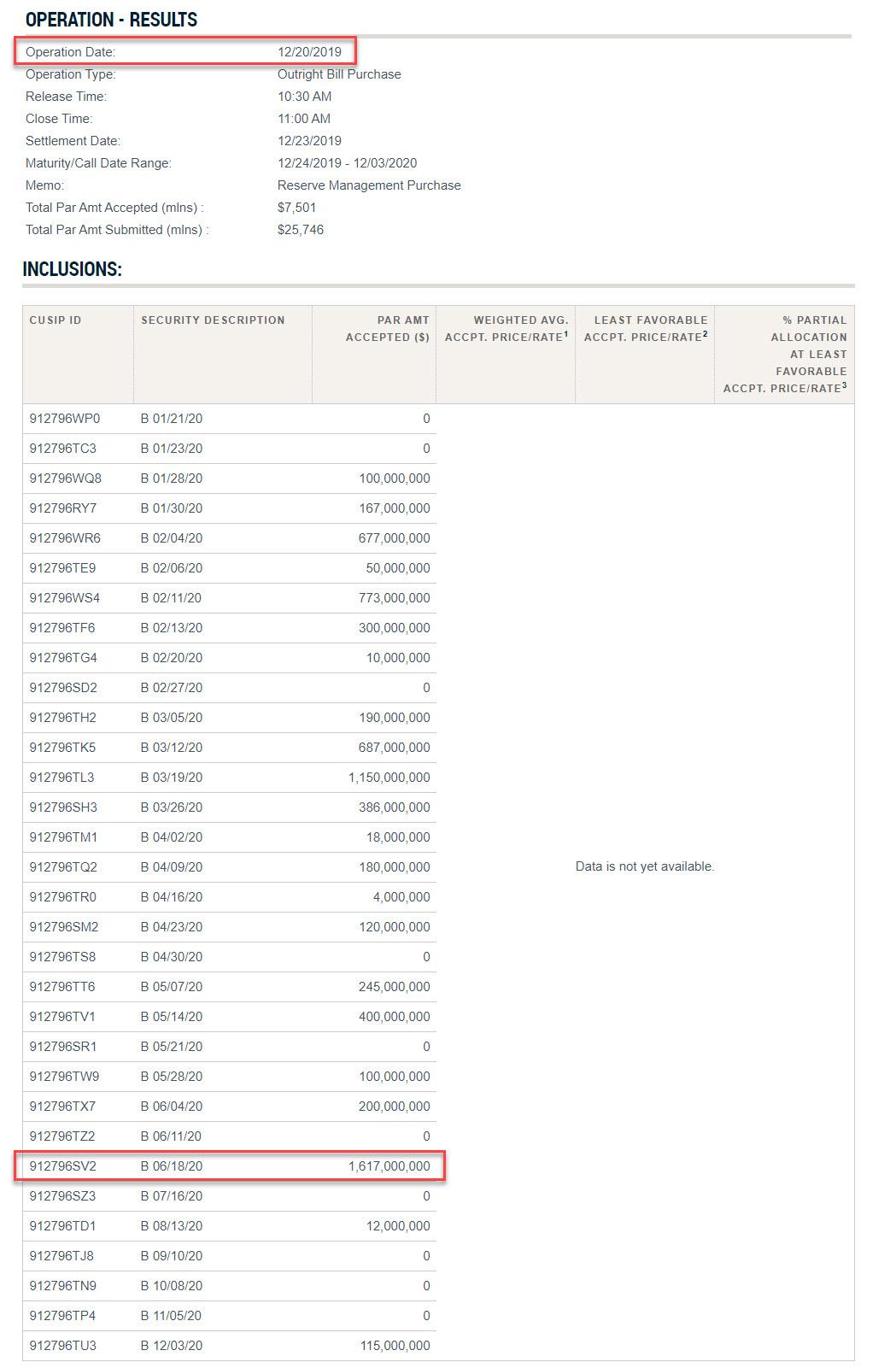 So what is going on? Well, for all those saying the US may soon unleash helicopter money, and/or MMT, we have some 'news': helicopter money is already here, and the Fed is now actively monetizing debt the Treasury sold just days earlier using Dealers as a conduit... a "conduit" which is generously rewarded by the Fed's market desk with its marked up purchase price.
In other words, the Fed is already conducting Helicopter Money (and MMT) in all but name. As shown above, the Fed monetized T-Bills that were issued just three days earlier - and just because it is circumventing the one hurdle that prevents it from directly purchasing securities sold outright by the Treasury, the Fed is providing the Dealers that made this legal debt circle-jerk possible with millions in profits, even as the outcome is identical if merely offset by a few days.
Perhaps during Fed Chair Powell's next Congressional hearings, someone actually has the guts to ask the only question that matters: why is the Fed now monetizing US debt, and pretending it isn't doing so just because it grants Dealers a 3-day "holding" period, for which it then rewards them generously?