The Military And State Can’t Handle The Trump Truth

Deployment of Russia’s hyper-sonic missiles is causing heartburn in the West.

From Zero Hedge:
A Connecticut hedge fund manager has pleaded guilty to deliberately misleading his LPs and eventually bilking them out of a total of $20 million over a roughly three-year period, according to an affidavit filed Thursday.
According to the complaint, filed in the Southern District of New York, Jason Rhodes, 47, of Rowayton, Conn., along with several co-conspirators, raised funds from about two dozen investors from 2013 to 2016, claiming their money would be invested and manged by "high-performing" portfolio managers.
But their money was instead diverted to a a variety of personal uses, including a $1 million payment to settle an unrelated civil lawsuit, a trip to Dubai, a luxury timeshare and an investment in a trucking company Rhodes co-owned with his wife.
According to the affidavit, between November 2013 and December 2016, Rhodes and a bevy of accomplices-turned-state-cooperators  "willfully and knowingly" altered account statements and misled their LPs - primary members of wealthy families - out of a combined $19.6 million via a "Ponzi-like" scheme that involved using fresh money from new investor-victims to pay back older investors. 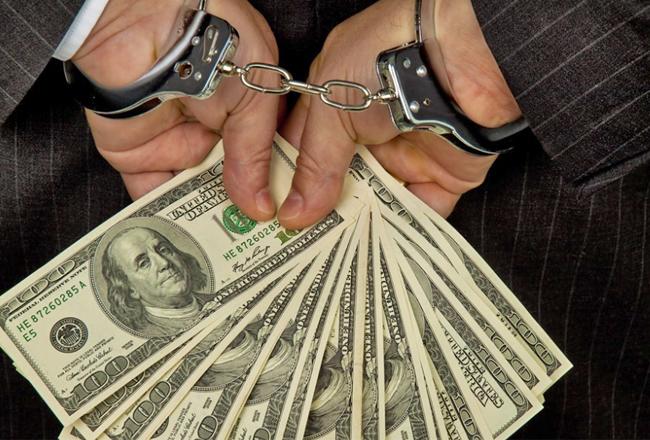 As many readers are undoubtedly thinking, Rhodes' scheme essentially involved taking a page out of the Bernie Madoff playbook, without the decades of fraudulently advertised market-beating returns.
Of course, the fraud at Sentinel - the name of Rhodes' firm - unfolded on a much smaller scale: Sentinel was a decidedly "boutique" firm with only 25 investors and a grand total of about $20 million under management. The firm raised most of its money by pitching wealthy families, and apparently had some success. And by the time the Rhodes and his partners were caught, they had squandered pretty much all of this money.
According to the affidavit, Sentinel marketed itself as having access to "high-performing portfolio managers" who helped guide two separate funds at Sent one of which focused on M&A arbitrage, and another that was a simple long-short equity fund.
Rhodes co-founded Sentinel with Mark Varacchi, who is named in the affidavit as an unindicted co-conspirator. In addition to leading the firm, Rhodes acted as chief risk officer, and also was the sole individual at the firm with signatory authority over Sentinel's prime brokerage accounts. Before Sentinel, Rhodes served as the managing director for risk management at "an institutional risk management firm", and also claimed to have worked as a "senior risk manager" at another unnamed multi-billion dollar hedge fund.
Varacchi and another named co-conspirator, Steven Simmons, both previously pleaded guilty to conspiracy to commit fraud.
According to the section of the affidavit that detailed Rhodes' fraudulent scheme, Rhodes created several sub-accounts at his prime broker, ostensibly to hold funds belonging to different LPs.
Then, between 2013 and 2016, Rhodes delivered no fewer than 26 'wire out' requests to his prime broker with the stated purpose that the money being withdrawn would be used to cover redemptions.
But in each of these instances, the funds were instead transferred to private accounts that Rhodes controlled. A complete breakdown can be found below: 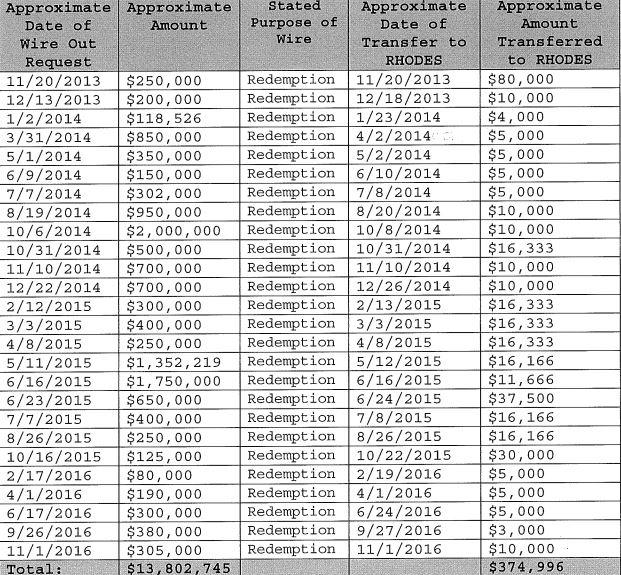 Instead of being returned to clients, he money was used to pay back prior investors, and to cover the firm's operating expenses, while some was also used for "personal" expenses by Rhodes and his co-conspirators.
At one point in 2013, Rhodes told one co-conspirator that he needed to take $80k out of the firm's accounts to invest in a "trucking business". In another violation, Rhodes took a portion of a $5 million investment from an LP and improperly used it to settle a civil lawsuit filed against Rhodes & Co.
The scheme started to unravel in 2015, when an LP asked for documentation verifying their $4 million-plus position in the fund, at a time when the accounts for both of Sentinel's Radar-branded funds had just over $1 million left. Unwilling to risk their fraud being discovered, Rhodes altered documentation from his prime broker to try and misrepresent to the investor the amount of money available in their sub-account.However, the LP eventually did discover the discrepancy, and threatened to report Rhodes to the authorities if their money wasn't returned. To accomplish this, Rhodes worked with Simmons to try and solicit more money from other LPs at the firm with the goal of using that money to pay back the other LP before they decided to report Rhodes to the SEC.
Eventually, this pile of lies, dodges and poor investments caught up with Rhodes, who has now pleaded guilty. It's unclear when he will be sentenced.
Rhodes is copping to four counts, including conspiracy to commit securities and wire fraud, securities fraud, wire fraud and investment advisor fraud.
Read the full indictment below:
u.s. v. Jason Rhodes Complaint by Zerohedge on Scribd