SHUT THEM DOWN: It’s time to end the tyranny of Big Tech censorship in America

Nearly Half Of Small Business Owners Expect To Close Down Permanently

Authored by Jeffrey Tucker via The American Institute for Economic Research,
For two to three months, Americans have suffered the loss of liberty, security, and prosperity in the name of virus control. The psychological impact has been beyond description. We thought we could count on basic rights and freedoms. Then over a few days in March, it all ended in ways hardly anyone could believe possible.
The manner in which governments dealt with foundational principles of modernity has been shocking. They put half the country under house arrest and managed every movement in disregard for the Bill of Rights and all legal precedent, to say nothing of the Constitution. It felt like a coercive unraveling of civilization itself. It’s like we are all waking up from a bad dream only to look around and see the wreckage that proves it was all real.
So how can we deal with this terror that befell us? One way is to figure out some aspect in which our sacrifice has been worth it, maybe not on net given the consequences, but surely some good has come out of this. If my email and feeds are correct, this is how many people have been justifying this. The psychology here is rooted in the sunk-cost fallacy: when you commit resources to something, even when it is a proven error, you tend to find justifications by doubling down rather than just admitting the mistake.
Thus have many people written me to say that whether you agree or disagree with the lockdown, we have to admit that it has saved millions of lives. I always write back and ask how they know that. They send me a link to a projection – those very projections that presume all kinds of things about cause and effect that we cannot know and which have proven wrong time and again throughout this crisis.
So let’s just grant that it is possible that lockdowns can be credited with slowing the spread of the virus, and perhaps preserving hospital capacity (which turned out to be unnecessary). Still, the virus doesn’t then get bored and move by to Wuhan or to another planet. It still sticks around, so at best, these measures only “prolong the pain,” in the words of Knut Wittkowski.
So even if lockdowns slow the spread in the short run, it’s not clear that they have saved lives from the coronavirus, even if it results in more death overall from deferred surgeries and diagnostics, suicides, drug overdoses, and depression.
The trouble here is that certain features of this experience stand out to contradict the idea that lockdowns are saving lives over the longer term. In New York, two thirds of hospitalized patients with COVID-19 were in fact sheltering in place during the lockdown, essentially living in forced isolation. The lockdown didn’t help them; it might have contributed to making matters worse.
Meanwhile, despite the media hate poured out against Florida’s youthful spring break revelers, where hundreds of thousands declined to socially distance at the height of the virus risk, I’ve yet to find a credible report of fatalities beyond two that were probably unpreventable. This is because the risks to the younger population are negligible, as we’ve known for a long time now.
In many countries, 30% to 60% of excess deaths trace to nursing homes. These environments are neither locked down nor open; the virus spread among the most vulnerable population after even just one exposure due to possible negligence and distraction by mass frenzy. In the midst of locking down the whole world, and our politicians were consumed with the desire to enforce stay-at-home orders and forced separation, the population that needed the most care was neglected. Even worse, in New York, California, and New Jersey, nursing homes were forced to take in COVID-19 patients.
One way we might discern whether and to what extent lockdowns have had any effect on infection and death is to examine the empirical case. Writing in the Wall Street Journal, T.J Rogers examined all the existing studies:

Do quick shutdowns work to fight the spread of Covid-19? Joe Malchow, Yinon Weiss and I wanted to find out. We set out to quantify how many deaths were caused by delayed shutdown orders on a state-by-state basis.
o normalize for an unambiguous comparison of deaths between states at the midpoint of an epidemic, we counted deaths per million population for a fixed 21-day period, measured from when the death rate first hit 1 per million—e.g.,‒three deaths in Iowa or 19 in New York state. A state’s “days to shutdown” was the time after a state crossed the 1 per million threshold until it ordered businesses shut down.
We ran a simple one-variable correlation of deaths per million and days to shutdown, which ranged from minus-10 days (some states shut down before any sign of Covid-19) to 35 days for South Dakota, one of seven states with limited or no shutdown. The correlation coefficient was 5.5%—so low that the engineers I used to employ would have summarized it as “no correlation” and moved on to find the real cause of the problem. (The trendline sloped downward—states that delayed more tended to have lower death rates—but that’s also a meaningless result due to the low correlation coefficient.)
No conclusions can be drawn about the states that sheltered quickly, because their death rates ran the full gamut, from 20 per million in Oregon to 360 in New York. This wide variation means that other variables—like population density or subway use—were more important. Our correlation coefficient for per-capita death rates vs. the population density was 44%. That suggests New York City might have benefited from its shutdown—but blindly copying New York’s policies in places with low Covid-19 death rates, such as my native Wisconsin, doesn’t make sense. 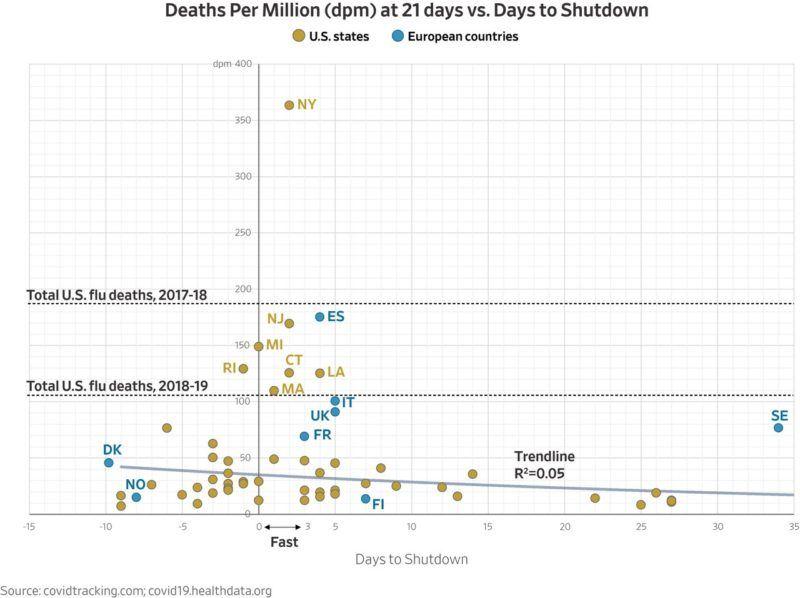 Turning to the international front, consider the work of Isaac Ben-Israel, head of the Security Studies program in Tel Aviv University and the chairman of the National Council for Research and Development. His detailed study from around the world compares locked down countries with those that stayed open. The Times of Israel summarizes his findings as follows.

A prominent Israeli mathematician, analyst and former general claims simple statistical analysis demonstrates that the spread of COVID-19 peaks after about 40 days and declines to almost zero after 70 days — no matter where it strikes, and no matter what measures governments impose to try to thwart it.

Even a casual look at the open societies of Sweden and Korea – despite going too far in interventions – demonstrate that they experienced lower rates of death than Europe and the U.K. Even the World Health Organization has praised Sweden’s response.
And a very careful empirical study of counterfactuals in Sweden concluded:

On the basis of the available data, we find that a lockdown in Sweden would not have limited the number of infections or the number of COVID-19 deaths. Theory suggests that this may be the result of people maintaining a larger social distance even in the absence of a lockdown—there could be, in other words, voluntary social restraint. Krueger et al. (2020), in particular, show this in the context of a formal model and suggest that this may be the relevant case for Sweden

Finally, we have a decisive study from Bloomberg that carefully charts lockdowns and death, concluding:
There’s little correlation between the severity of a nation’s restrictions and whether it managed to curb excess fatalities — a measure that looks at the overall number of deaths compared with normal trends.
Cause and effect are notoriously difficult to discern in human affairs on a macroscale. Even if it connects somehow to intuition that locking down keeps the virus away, they do not deal with the reality that the virus is still there, even if temporarily contained (which itself is arguable).
Quarantines, lockdowns, shelter-in-place orders and so on reflect a premodern bias and an unscientific impulse to run away and hide, a method used from the ancient world through selective quarantines in some cities in 1918. Then we got smart, developed a modern theory of viruses (well explained here), and eschewed them in every pandemic since World War II. Then, somehow, and mysteriously, one century flipped to the next and we got dumb again and here we are. 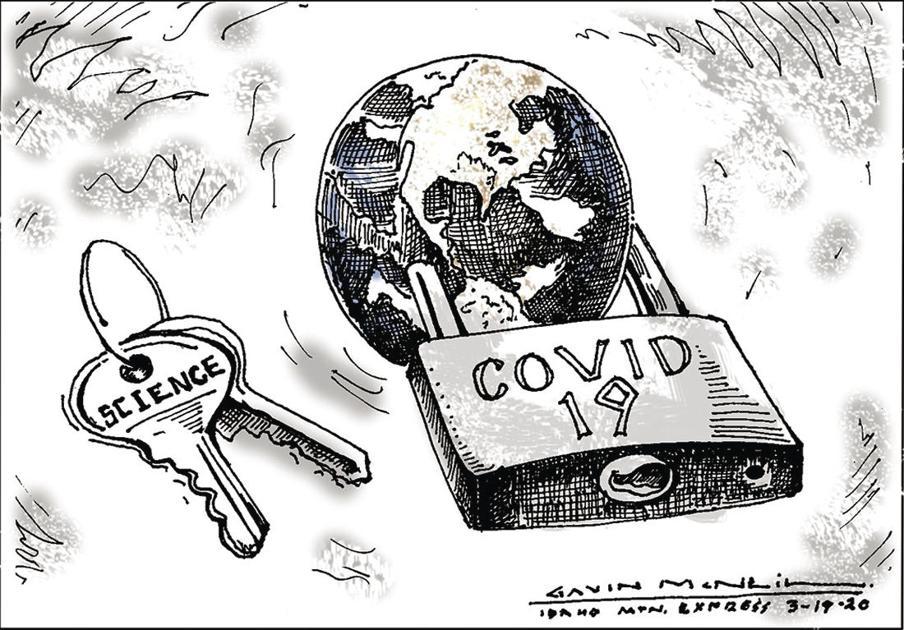 Did the lockdown save lives? It’s possible but not yet proven, and the evidence so far points to a negative answer. No matter how much we try to spin this in our heads, no matter how much we want to believe that something good has come out of this catastrophe, we are all going to have someday to deal with the terrible but likely reality that it was all for naught.
I conclude with the words of the great physician who is credited with smallpox eradication, Donald A. Henderson (1928-2016).

The interest in quarantine reflects the views and conditions prevalent more than 50 years ago, when much less was known about the epidemiology of infectious diseases and when there was far less international and domestic travel in a less densely populated world. It is difficult to identify circumstances in the past half-century when large-scale quarantine has been effectively used in the control of any disease. The negative consequences of large-scale quarantine are so extreme (forced confinement of sick people with the well; complete restriction of movement of large populations; difficulty in getting critical supplies, medicines, and food to people inside the quarantine zone) that this mitigation measure should be eliminated from serious consideration.