One month ago, shortly after our return to twitter from "permanent" banishment, when so much public attention had suddenly shifted to the retail daytrading platform Robinhood, we explained just how it is that Robinhood was so efficient at moving markets, and it had nothing to do with Robinhood or its small but dedicated army of 10-year-old daytrading fanatics. Instead, it had everything to do with various High Frequency Trading platforms buying up the retail orderflow that Robinhood  was so generously packaging and reselling to the highest bidder, effectively giving HFTs a risk-free way of making pennies from every trade, which would then propagate like wildfire across various trading venues, massively accentuating every small move thanks to the momentum-ignition capabilities of HFT algos. 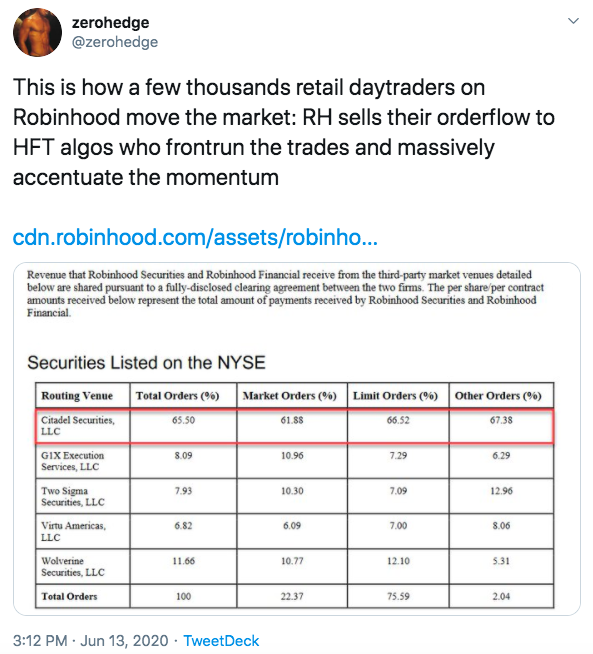 We then also pointed out that Robinhood engages in a practice called payment-for-order-flow... 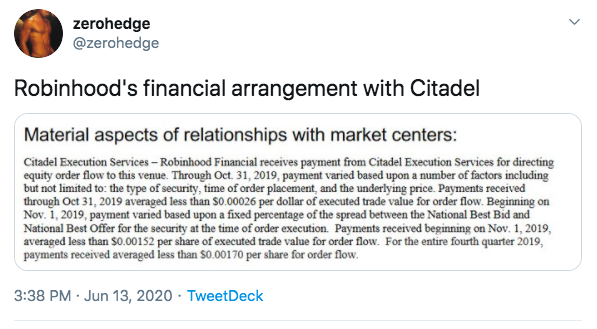 ... for reasons that would become known shortly.
Unfortunately, both of those tweets no longer exist for the simple reason that just days after they were published, we received an angry letter from Citadel's lawyers at Clare Locke threatening to sue us into oblivion if we did not immediately retract and delete said tweets. 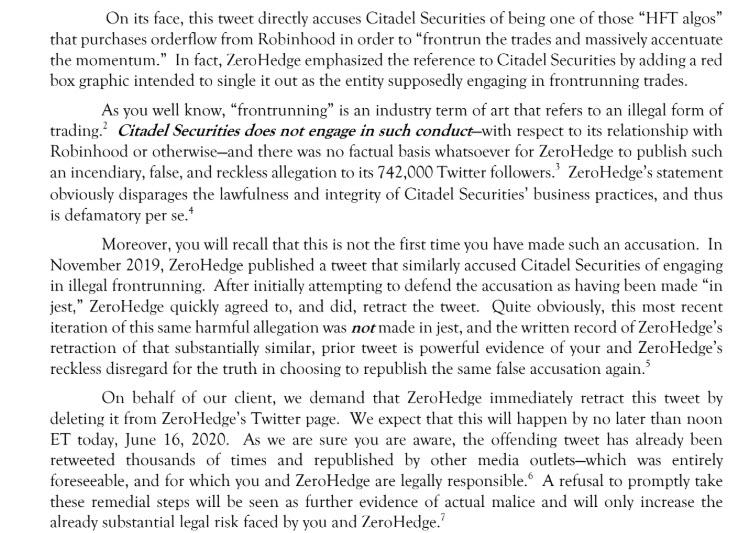 Some key phrases of note from the above text:
As the letter correctly notes, this was not the first time Citadel Securities (which is majority-owned by Ken Griffin, the billionaire investor, and is the sister firm to Citadel, the hedge fund he runs) threatened legal action against Zero Hedge for accusing the trading giant of frontrunning orders. On November 22, just hours if not minutes after a tweet of a similar nature, we got a similar legal threat from the same law firm. Again, some of the highlights from that particular letter:
Needless to say, instead of engaging in a legal battle with the world's richest and most powerful trader and his army of lawyers, we decided to simply comply with their demand. That said, dear gentlemen from ClareLocke - we do know very well that frontrunning is an unethical and illegal trading practice. But we wonder: does your client know that?
The reason why we ask is very simple. According to a Letter of Acceptance (No. 2014041859401), Waiver and Consent published by financial regulator FINRA, none other than Citadel Securities was censured and fined for engaging in - drumroll - "trading ahead of customer orders." 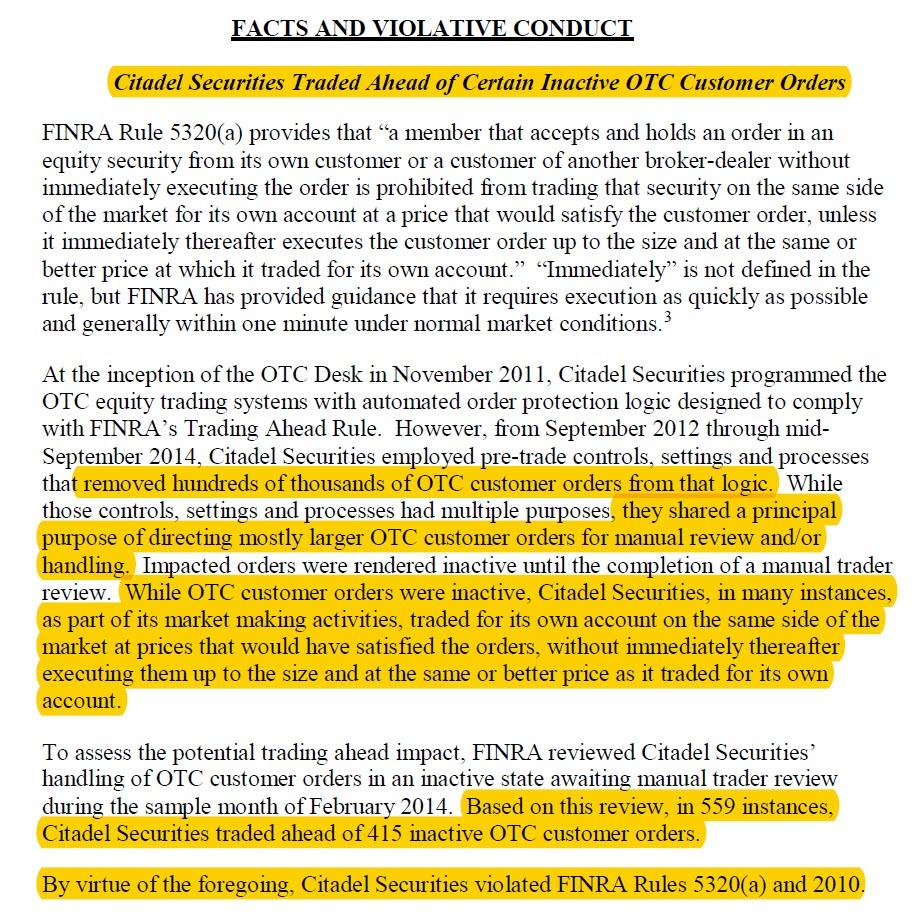 Now we admit that our financial jargon is a bit rusty these days, but "trading ahead of customer orders" sounds awfully similar to another far more popular world, oh yes, frontrunning!
Jargon aside, some of the other highlighted words we are very familiar with, such as "hundreds of thousands"... and "559 instances" in which Citadel traded ahead of customer orders.
Now, we may be getting a little ahead of ourselves here, but it was Citadel's own lawyers that informed us on more than one occasion that:

"frontrunning" is an unethical and illegal trading practice."

So, what are we to make of this? Could it be that Citadel was engaging in at least 559 instance of what its lawyer called "unethical and illegal trading practice." Surely not: after all the lawyers would surely know very well how ridiculous and laughable their letter and threats would look if it ever emerged that Citadel was indeed frontrunning its customers.
But then we read that Finra censured and fined Citadel $700,000 - or as twitter user @KennethDread puts it 0.70% Basquiats...
... and it appears that Citadel may indeed have engaged in some of what its own lawyers called "unethical and illegal" trading practice, especially since Citadel Securities' own General Counsel, Steve Luparello signed the Finra AWC: 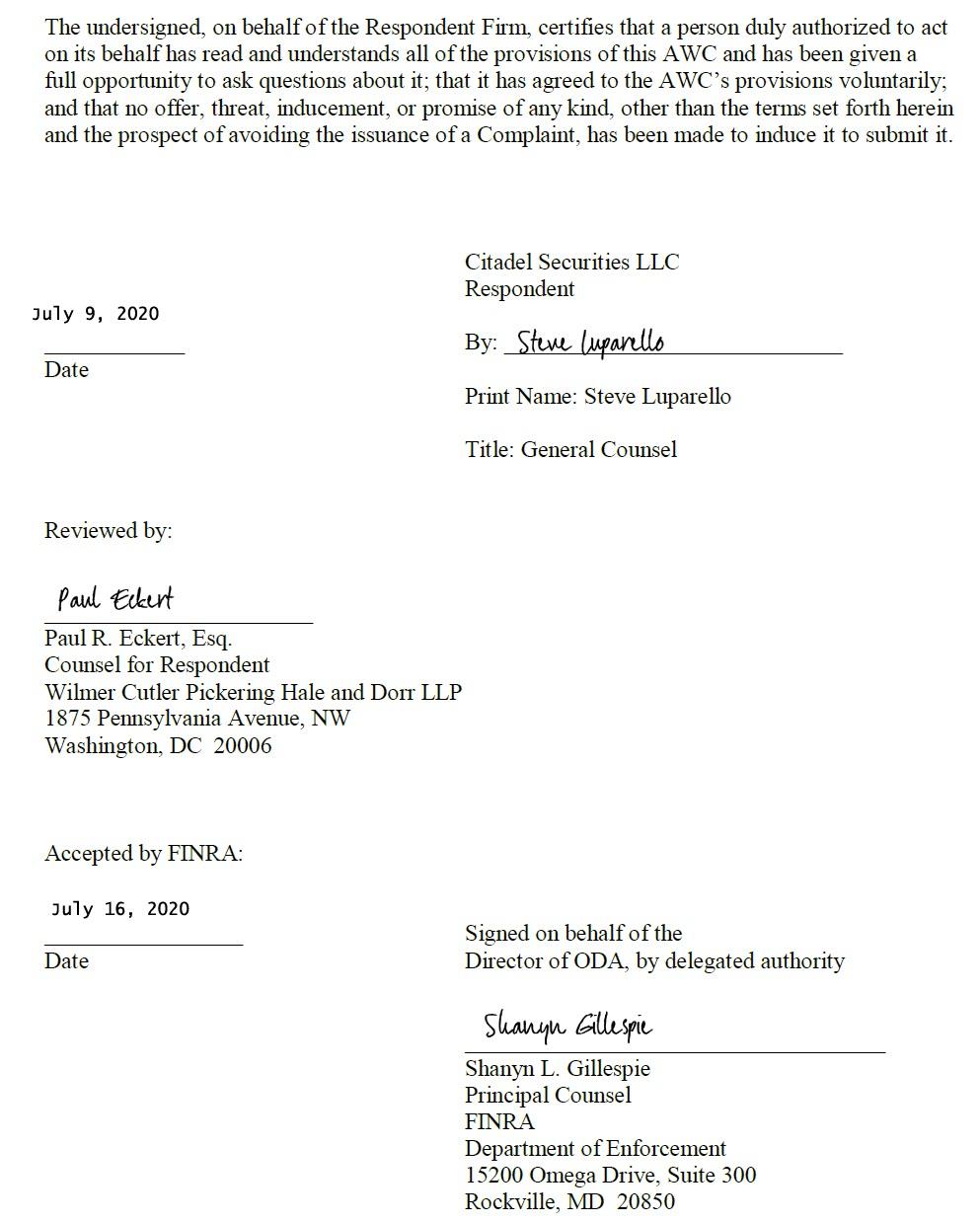 Well that's... awkward.
And lest someone ignores all of the above - after all it was published in a fringe, tinfoil conspiracy theory website which according to glorious liberal wizards at Wikipedia is somehow both "far right" and "libertarian" at the same time - here is the far more "erudite" Financial Times   explaining what happened:

Over a two-year period until September 2014, the market-maker removed hundreds of thousands of large OTC orders from its automated trading processes, according to Finra. That rendered the orders “inactive” and so they had to be handled manually by human traders.
Citadel Securities then “traded for its own account on the same side of the market at prices that would have satisfied the orders,” without immediately filling the inactive orders at the same or better prices as required by Finra rules, the regulator said.
In February 2014, a sample month reviewed by Finra, the market-maker traded ahead in nearly three-quarters of the inactive orders. “Based on this review, in 559 instances, Citadel Securities traded ahead of 415 inactive OTC customer orders,” the regulator said.

Of course, since the action was launched by Finra and not the SEC - probably for a reason - Citadel was allowed to put the whole sordid affair behind it without admitting or denying the claims. Just one glitch: the company was required to make whole any customers affected, not something a market maker does if they legitimately "deny" anything bad actually happened.
The good news is that neither Citadel nor its lawyers can go after us again for merely reporting what Finra already found because on page 11 of the AWC we read the following:

The Firm may not take any action or make or permit to be made any public statement, including in regulatory filings or otherwise, denying, directly or indirectly, any finding in this AWC or create the impression that the AWC is without factual basis.

Which means that going forward, allegations about Citadel frontran its clients - on at least 559 instances no less - are fair game. That said, Citadel did make a statement to the FT:

"We have addressed all of Finra’s concerns and take very seriously our obligations to comply fully with its rules. The issue relates to a limited number of manually handled orders, most of which occurred in 2012-2014."

Which is a succinct way of summarizing precisely what Finra said. Our own request for comments was not returned by the publication time.

But wait, there's more!
Finra also said Citadel Securities fell short of supervisory requirements and failed to display certain OTC customers’ limit orders: instructions to buy or sell at a specific price, or better. As the FT notes, "nearly half of the 467 limit orders reviewed by the regulator in the six years until September 2018 were found to violate Finra’s requirements to display orders. The bulk of the violations were for failing to execute trades against existing quotations in a timely manner, Finra said."
What does the above mean for clients? Well, they are welcome to sue Citadel Securities and get their money back. As Finra writes, "the imposition of a restitution order or any other monetary sanction herein, and the timing of such ordered payments, does not preclude customers from pursuing their own actions to obtain restitution or other remedies."
What does the above mean for Ken Griffin? Well, as noted above, the penalty is about 0.7% of what the CEO recently paid for a Basquiat painting.

It's also clear that the size of the "penalty" will certainly not force Griffin to mortgage one or more of his extensive properties located in New York, London, Chicago, or Palm Beach and countless others cities across the globe:
One thing that is certain is that "trading" clearly pays, even if it means occasionally and purely unaccidentally "removing hundreds of thousands of mostly larger customer orders" from mandatory Trading Ahead and Limit Order Display Rules and customer protections. Surely that happens every day to all of us.
In fact the only confusion we have at this moment is who is more ironically named: Citadel or Robinhood?