"We have a researcher who was removed by the RCMP from the highest security laboratory that Canada has for reasons that government is unwilling to disclose. The intelligence remains secret. But what we know is that before she was removed, she sent one of the deadliest viruses on Earth, and multiple varieties of it to maximize the genetic diversity and maximize what experimenters in China could do with it, to a laboratory in China that does dangerous gain of function experiments. And that has links to the Chinese military." -Amir Attaran 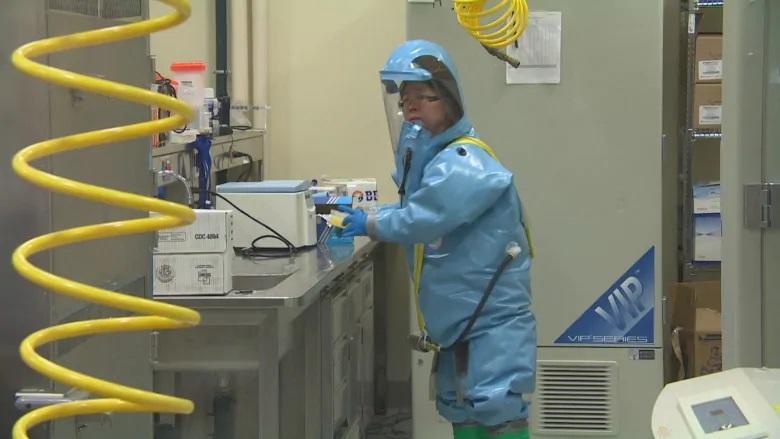 A Chinese scientist who was escorted out of Canada's only level-4 biolab over a possible "policy breach" shipped dealdy Ebola and Henipah viruses to the Wuhan Institute of Virology, according to the CBC, citing newly-released documents. The shipment is not related to COVID-19 or the pandemic.
Dr. Xiangguo Qiu, her husband Keding Cheng and her Chinese students were removed from the Canadian lab after the Public Health Agency of Canada (PHAC) asked the RCMP to investigate several months earlier. According to PHAC, Qiu's eviction from the lab is not connected to the shipment.
Beijing Ramps Up Preventative Measures After Dozens Of COVID-19 Cases Emerge
"The administrative investigation is not related to the shipment of virus samples to China, said PHAC chief of media relations, Eric Morrissette."
"In response to a request from the Wuhan Institute of Virology for viral samples of Ebola and Henipah viruses, the Public Health Agency of Canada (PHAC) sent samples for the purpose of scientific research in 2019."
To recap, a Chinese scientist, her husband and her Chinese students were escorted out of Canada's only Level-4 lab for reasons unknown, and which are not related to her shipment of deadly viruses to the Wuhan Institute of Virology.
"It is suspicious. It is alarming. It is potentially life-threatening," said University of Ottawa law professor and epidemiologist, Amir Attaran.
While Canada doesn't do 'gain-of-function' experiments - which are where natural pathogens are mutated in a lab and assessed to see if it has become more deadly or infectious, "The Wuhan lab does them and we have now supplied them with Ebola and Nipah viruses. It does not take a genius to understand that this is an unwise decision," said Attaran.
"I am extremely unhappy to see that the Canadian government shared that genetic material."

Attaran pointed to an Ebola study first published in December 2018, three months after Qiu began the process of exporting the viruses to China. The study involved researchers from the NML and University of Manitoba.
The lead author, Hualei Wang, is involved with the Academy of Military Medical Sciences, a Chinese military medical research institute in Beijing.
All of this has led to conspiracy theories linking the novel coronavirus responsible for COVID-19, Canada's microbiology lab, and the lab in Wuhan. -CBC

According to the report, the RCMP and PHAC have repeatedly denied any connections between the virus shipments and COVID-19.
According to the newly-released documents, the following virus strains were shipped to the WIV (approximately 15 ml):

ZEROHEDGE DIRECTLY TO YOUR INBOX
Receive a daily recap featuring a curated list of must-read stories.
The documents also shed light on communications from the months leading up to the shipment - including confusion on how to package the viruses, along with a lack of decontamination of the package prior to its shipment, as well as concerns expressed by NML Director-General Matthew Gilmour to his superiors in Ottawa - particularly over where the package was going, what was in it, and whether its paperwork was in order.

In one email, Gilmour said Material Transfer Agreements would be required, "not generic 'guarantees' on the storage and usage."
He also asked David Safronetz, chief of special pathogens: "Good to know that you trust this group. How did we get connected with them?"
Safronetz replied: "They are requesting material from us due to collaboration with Dr. Qiu." -CBC

According to the report, the shipper of the viruses had originally planned to use inappropriate packaging, and only corrected the mistake when the WIV flagged the issue.
"The only reason the correct packaging was used is because the Chinese wrote to them and said, 'Aren't you making a mistake here?' If that had not happened, the scientists would have placed on an Air Canada flight, several of them actually, a deadly virus incorrectly packaged. That nearly happened," said Attaran.
Read the rest of the report here.