Authored by Steven Guinness,
As confirmed by several economic outlets, including Bloomberg, Bank of England governor Andrew Bailey took part in a VTALK with students this past Monday for Speakers for Schools. When the subject of digital currency came up, Bailey said:

We are looking at the question of, should we create a Bank of England digital currency. We’ll go on looking at it, as it does have huge implications on the nature of payments and society. I think in a few years time, we will be heading toward some sort of digital currency.
The digital currency issue will be a very big issue. I hope it is, because that means Covid will be behind us.

Whilst only a short quote, there are several strands to pick up on here. 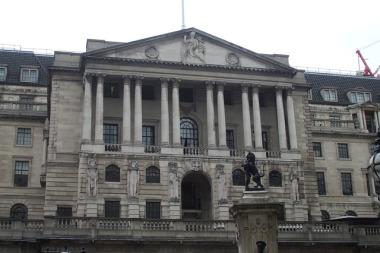 Firstly, Bailey stating that the BOE are looking into creating a CBDC is not a new revelation. I posted a series of articles in May which looked extensively at a discussion paper published by the bank days before the Covid-19 lockdown was enforced. The paper, ‘Central Bank Digital Currency – Opportunities, challenges and design‘, went as far as detailing the possible technological composition of a future CBDC. It was in 2014 when the BOE first began discussing digital currencies in their September quarterly bulletin.  Six years on, those discussions have advanced notably.
Secondly, if Bailey’s assertion is correct that ‘in a few years time, we will be heading toward some sort of digital currency‘, this would align with the BOE’s Real Time Gross Settlement renewal programme. In August 2019 I posted an article that outlined what the renewal will consist of (Working in Tandem: The Reform of Payment Systems and the Advance of Digital Technology). From 2023 onwards, the bank wants renewed services of RTGS to begin coming online, and by 2025 for it to be fully rolled out and operational.
Consider that this is taking place amidst the Bank for International Settlements ‘Innovation BIS 2025‘ initiative, something which I have regularly written about. This is the ‘hub‘ which brings all leading central banks together in the name of technological innovation.
The RTGS ‘renewal‘ will allow for the bank’s payment system to ‘interface with new payment technologies’, which given the information that the BOE has so far disseminated would likely include distributed ledger technology and blockchain.
For the bank to introduce a CBDC accessible to the public, they will require the reformation of their systems, which is exactly what is happening.
Thirdly, Bailey admits that introducing a CBDC would have ‘huge implications on the nature of payments and society‘. On the payments front, the BOE are pushing the narrative that any CBDC offering would be a ‘complement‘ to cash. It would not, according to them, mean that cash would be withdrawn from circulation. But as I have noted previously, the General Manager of the BIS, Agustin Carstens, made clear in 2019 that in a CBDC world ‘he or she would no longer have the option of paying cash. All purchases would be electronic.‘
The trend of digital payments outstripping cash has been present for several years now. My position is that instead of simply outlawing cash, the state will allow the use of banknotes to fall to the point that the servicing costs of maintaining the cash infrastructure outweigh the amount of cash still in circulation and being used for payment. They will take the gradual approach as opposed to prising cash away from the public. In the end it has the same effect but appears less premeditated. From the perspective of the state, it is much more desirable if people are seen to have made the decision themselves to stop using cash, rather than the state imposing it upon the population.
The societal aspect is equally as serious, because those who depend on using cash are finding that access to it is growing more restrictive. This is something I have also posted about (Access to Cash: The Connection between Bank Branch Closures and the Post Office). Rural communities in particularly are being compromised, with some entirely dependent on their local post office to withdraw funds. Matters are made worse when the Post Office network itself is coming under increasing strain.
It was also revealed this week that during the Covid-19 lockdown, over 7,000 ATM’s across the UK were closed due to social distancing measures. This represents over 10% of the UK’s ATM network. Some of these ATM’s still remain out of use, particularly at supermarkets and outside certain bank branches. Equally, some of these branches remain closed four months after the lockdown was introduced, and those that are open are only allowing in a couple of people at a time.
You will recall the hysteria around the supposed dangers of using cash as Covid-19 was labelled a pandemic. On no scientific basis whatsoever, people have been led to believe that handling cash can transmit the virus. This is primarily why cash withdrawals at ATM’s crashed leading into the lockdown by around 50%. This time last year transaction volume was at 50.9 million. Today it is 30.8 million, a 40% drop. From personal experience as a cash office clerk, cash use is now beginning to pick up, but remains well below pre-lockdown levels.
Finally, Bailey commented that he hoped ‘the digital currency issue will be a very big issue‘, because if it was it would mean that ‘Covid will be behind us.‘ A valid question to ask here is why when Covid-19 is ‘behind us‘ should that make the case for a CBDC stronger? The answer lies partly in the growing narrative of life after the pandemic, which plays directly into the World Economic Forum devised ‘Great Reset‘ agenda. Part of the ‘Great Reset‘ includes Blockchain, Financial and Monetary Systems and Digital Economy and New Value Creation.
On first glance, you can see how Covid-19 benefits the drive towards central bank digital currencies.
We are told at every turn that life cannot possibly go back to how it was pre coronavirus, including our relationship with money. Predictably, it did not take global institutions like the BIS long to begin reaffirming the cashless agenda. In April they published a bulletin called, ‘Covid-19, cash, and the future of payments‘ where they stated:

In the context of the current crisis, CBDC would in particular have to be designed allowing for access options for the unbanked and (contact-free) technical interfaces suitable for the whole population. The pandemic may hence put calls for CBDCs into sharper focus, highlighting the value of having access to diverse means of payments, and the need for any means of payments to be resilient against a broad range of threats.

Global planners are seizing on the opportunity that Covid-19 has created. But no one should be deceived into thinking that their prescription for a digital monetary system, with CBDC’s at the center, is only coming to light because of the pandemic. This has been in the works for years.
The banking elites are hoping that once global payment systems have been reformed, CBDC’s will not be far behind. Judging by their own timelines, by 2025 a global network of CBDC’s is a real possibility. The more people that turn away from using cash today, the easier the transition away from tangible assets will prove for those who are angling for it to happen.